The volcanic alert on White Island has been raised to level three, after a small eruption while a tour group was visiting. 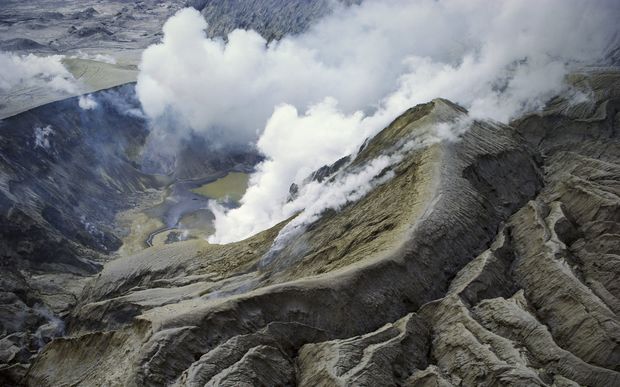 The active White Island volcano in the Bay of Plenty. Photo: AFP

GeoNet said the the volcano, 48km off the coast of Whakatane in Bay of Plenty, is showing heightened unrest.

One witness said he saw black smoke coming from the island this morning.

The highest alert level is five.

A new crater was found on the island after a minor eruption in April.

GNS duty volcanologist Steve Sherburn said, as far as the organisation could tell from its monitoring data, there had been no escalation in the level of activity at White Island since late morning.

"Some of our cameras are now been affected by ash and steam, so we may not see much from them in the short term.

"The level of volcanic activity seen earlier today was very minor, with volcanic ash [having] been passively emitted from a vent on the 2012 lava dome."

The ash was visible on a MetService satellite image, which showed a plume extending offshore of East Cape, Mr Sherburn said.

"Any ash fall will follow wind direction, and is likely to be blown offshore over the next day."

Mr Sherburn said GNS Science would review the situation tomorrow morning to see if there were any changes in the situation overnight.