A lawyer representing the wealthy family of a 19-year-old who assaulted a policewoman says the teenager has taken full responsibility for his actions. 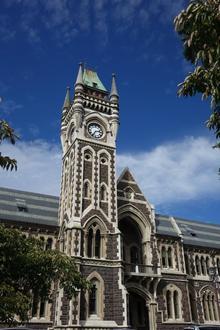 Nikolas Delegat, the son of New Zealand wine magnate Jim Delegat, was yesterday sentenced to 300 hours of community work and a $5000 compensation payment.

The former Otago University student had been drinking heavily in March last year in Dunedin, when he got angry and assaulted a campus watch officer.

He then punched a police officer four times in the head as she tried to restrain him.

At the sentencing yesterday, the court was told there were mitigating factors including mental health problems, and that Delegat had since undertaken rehabilitation and given up alcohol.

Delegat was represented by a top Auckland lawyer and got better treatment than other offenders, he said.

"If the same person had been at the other end of the, shall we say, social-economic scale, and maybe poor or Polynesian or from another part of the city or the country, they probably would've been unlikely to have got the same consideration."

The police were not commenting on the sentence given to the teenager.

Otago Coastal area commander Inspector Kelvin Lloyd issued a statement saying Constable Alana Kane, who Delegat had punched, was very grateful for the support and concern that members of the public had expressed to her.

The court was told yesterday Ms Kane was treated in hospital for 15 days and was off work for two months after the assault.

But Mr Lloyd said neither she nor the police would comment on the severity of Delegat's sentence, nor the Police Association's view the sentence looked too light.

Mr Lloyd said operational policing always carried an element of risk, but its staff did not go to work expecting to be assaulted.

Brendan Meech, who described himself as the Delegat family's friend and lawyer, released a statement saying the teenager took full responsibility for his actions.

He had attended a restorative justice conference, where he expressed his remorse, and again apologised to the officer and security guard whom he had assaulted and all others concerned, Mr Meech said.

"Nikolas was in the first two months of his university study away from home in Dunedin. He made a bad decision in the heat of the moment which caused considerable harm to those affected, which he regrets.

"He also apologises to his family and those around him for the trouble he has caused them."

One experienced defence lawyer, Grant Tyrrell, said 300 hours of community work was not a light sentence for a first assault offence.

The maximum sentence would have been 400 hours of community work, the Christchurch-based lawyer said.

"In a first offence, a community-based sentence would probably be the expected sentence.

"That's not to undermine the seriousness of the incident but there's a number of factors the court has to take into account, and a 300-hour community work sentence - it's three quarters of the maximum, it's a big sentence."

It would be unwise to rush to judgement without knowing all the facts considered by the judge, he said.

No longer a student at Otago University

Otago University, meanwhile, said Delegat chose to withdraw from his studies there earlier this year.

Asked if it was pursuing any disciplinary action against him, the university said it could not pursue the matter as he was no longer a student.

It confirmed he had been a student at the time of the assaults in March 2015, and returned for the rest of last year.

It said it offered Delegat outstanding pastoral care, but he chose to leave this year.

The university would not give further details, citing privacy laws.