The Tararua District Council is changing its testing methods after receiving both positive and clear water readings for E coli in Pahiatua's water supply.

Tararua District mayor Roly Ellis said the council was taking advice from the Ministry of Health and Mid-Central District Health Board.

He said residents would have to continue boiling their water until at least Thursday, subject to test results, after the bug was found at the town water's bore head on Friday.

Today's result on the bore sample was negative for E coli, but Mr Ellis said testing on Friday and Saturday returned a positive reading. It was clear on Sunday, but positive again on Monday.

The testing regime of the bore water had been doubled with another lab used for testing from tomorrow, Mr Ellis said.

The first positive reading came back on Friday at 11am and within an hour the council had rung the retirement home, the medical centre and health inspector, he said.

The council did a leaflet drop throughout the town at 1pm and banged on doors to tell people about the news, said Mr Ellis, with the whole town alerted by 5pm.

He said three consecutive clear tests were needed before the notice to boil water could be lifted.

It took a day for a test to be analysed and more results would be known this afternoon.

"We have tested all around the top of the bore ... we are sampling in a slightly different way today to see whether there's a problem with the sampling.

"We ordered a chlorinator as soon as the Havelock [North] thing came up. We've got a bore that's 65 to 90 metres down which is far lower than Havelock's and is regarded as a safe bore being so deep.

"The ministry is very happy the water is not chlorinated at that depth."

The council started up the chlorinator at 1pm on Friday and started flushing through the bore water, Mr Ellis said.

There had been no positive results for E coli from the town's reticulation (pipe) system, which was already chlorinated.

A couple of cafes found their takings had dropped on Saturday, but there had "not been a massive flap from people", he said.

A tanker is providing residents with chlorinated water from a tanker outside the Pahiatua Service Centre.

Mr King said, despite that decision, events overtook the council when, on Friday, a standard sample came back with E coli.

"Although we're not required to chlorinate the bore, the lesson from Havelock is to add a another barrier to E coli getting into the pipework.

Alison Franklin owns and operates the Black Stump Cafe and Harrows Restaurant in Pahiatua with her husband, Graeme. 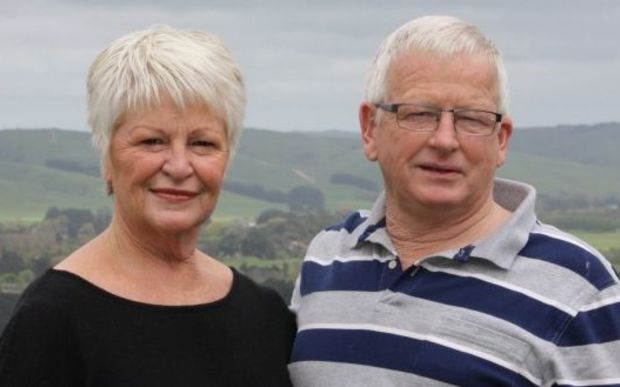 Alison and Graeme Franklin - the owners of the Black Stump Cafe and Harrows Restaurant in Pahiatua. Photo: Supplied

She said there had been some impact on the cafe's trade on Saturday and it was a very quiet day.

"The council flushed the water pipes in the town and in doing that it put dirt through the lines. We noticed when we flushed one of our toilets that the water was brown.

"My husband turned the coffee machine on and it made this horrendous sound and what had happened was it had blocked the filter. I thought 'no coffee', we may as well close. It was 2pm and we just closed an hour early."

She said some people had become "quite hysterical" when the news broke.

"'[People said] 'oh, I haven't been feeling particularly well this week it must be the water', but there was nothing in the town water, this is what people fail to see, they read headlines and intros, but they don't read a lot of the content of news articles."