An Italian woman born in the chaos of World War II wants to pay her respects to the family of an unknown New Zealand soldier who helped with her birth, and hopes a photo of his children will help find them. 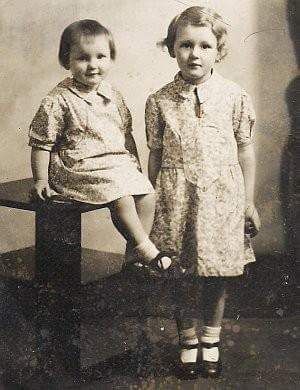 The two children of an unknown soldier named Martin, who helped an Italian woman in labour during World War Two. Photo: Supplied

A New Zealand soldier, known only by the name of Martin, has been on the mind of an Italian woman, Angela for as long as she can remember.

She is now 72 and is from the village of Casalanguida, south of Chieti, in the Abruzzo region of central Italy.

She can not remember Martin, because he died not long after she was born, but if it was not for him, she would not be here.

Her mother, Maria Mancini, gave birth to Angela safely in hospital in January 1944, but only because Martin offered to take her in his jeep, through a storm and the dangers of war.

Angela had a twin, Giuseppina, but she died only a few days after being born.

Martin visited Maria in hospital, but died a few weeks later in battle near Cassino. But before he did, he gave her a photo of his own two young daughters.

It was this photo that author and historian Harry Shindler, who lives in Italy, was hoping might solve the mystery of just who Martin was. He wanted to give Maria's descendants, Angela and her daughter Katia, the chance to pass on Maria's thanks to Martin's family.

"She told her that one day you must try and find his family because he saved our lives and to thank them."

A civilian doctor phoned an allied unit stationed nearby asking if there was anyone who could take Maria to hospital because she is going to give birth to twins and she will die if they do not get to the hospital.

"This lad stepped forward, saying 'I will take her'."

Mr Shindler said he had been looking for Martin for several years now with no luck.

"All over the world but I can't find him anywhere."

He suspected that Martin's two daughters in the photograph would be aged about 80 now.

"We are hoping that someone will see the photo and some old lady might say, yes, that is me."

All that Maria and her family knew of the mystery man was that his name was Martin and that he had stripes on his uniform, suggesting he was a corporal or sergeant.

"It seems a doctor would have phoned them rather than phoned the infantry," said Mr Shindler.

Mr Shindler said he had been to all the war cemeteries in Italy looking for Martin, but with no luck.

He was hoping this story and the photo might jog a few memories and provide an answer for Maria's family in Italy.