A wet house is a residential facility where alcoholics can continue to drink, and research from Washington University found most of those people would halve their intake while they were there. 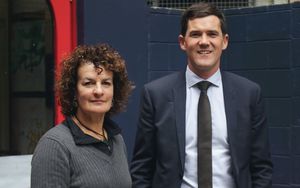 The move has been welcomed by those who work with rough sleepers, who said the city's homeless population and begging problem was growing.

"The wet house is about accommodation and getting people into their own homes, being welcoming of individuals who have substance addiction needs and making sure they've got somewhere to live, that they're not living on the streets," said Mr Lester.

"Ultimately so they can be in their own accommodation, be independent - that won't be possible for every individual - but we hope for the majority it would be."

The council already spent about $1.2 million each year on support services through its Te Mahana, or ending homelessness strategy, said Mr Lester.

The wet house, which would have about 30 to 40 beds, would get people off the streets and save police and the health system time and money, he said.

There was evidence that allowing alcoholics to drink in a safe place meant they drank less and had more support, in the same manner as a needle exchange.

Research published in the American Journal of Public Health found homeless people who stayed in wet houses cut their intake by half.

"People use substances whether it's to block out the cold, whether to block out fear or just to simply manage a life on the streets," she said. "When people access safe, affordable, permanent housing, there's a natural process that occurs that people become more well."

Despite the evidence, it could be a battle to get the wet house set up.

In 2009, a similar proposal for an eight-bed facility in Island Bay was scuppered in the face of huge community opposition coupled with funding problems.

But Mr Lester said the new plan was for a central city location which was close to other support services.

"Wellingtonians see this as a foremost issue. They want a response, they want an innovative response. What they don't want to see is people sleeping rough on our streets and people begging on our streets.

"What they also don't want to see, and we've had almost universal feedback on this, is they don't want to see beggars or homeless people banned or dragged away into different parts of the city."

If he were to become mayor, he said the council would lobby the government more strongly to solve homelessness, and would also push for tenants in council housing to be eligible for the Income-Related Rent Subsidy.