The secondary schools being set up in Napier and Hamilton by a drilling company and an educational trust will be offering a kaupapa Māori education.

The Napier school, Te Aratika Academy, would provide a vocationally-focused education in a Māori environment for boys in Years 11, 12 and 13.

Civil construction firm Te Aratika Drilling has created a trust to set up and run the school.

The company's director, Ronnie Rochel, said it was already helping young men who had not done well at school and it wanted to do more.

Ms Rochel said, based on her company's experience, most of the boys enrolling in the new school would be disengaged from regular schools.

The school's director, Casey Tapara, said it would provide NCEA levels 1, 2 and 3 in all regular school subjects with a practical focus.

Trust chairperson Cath Rau said it had been supporting Māori education providers for years and decided it was time to provide the education itself.

"We saw an opportunity through the partnership school initiative to use the cumulative knowledge and experience that we've gained in the Māori-medium pipeline and provide an educational opportunity for Māori students in Hamilton who have not yet had the opportunity to learn te reo Māori or to learn in a kaupapa Māori context," she said.

"We really understand the importance of language, culture and identity and most of the students in Hamilton at least haven't had the opportunity to engage in a programme that provides them with that level of support so that's what we're hoping to provide them."

Ms Rau said the school would start with students in Years 7-9 next year and some families were already interested in enrolling their children.

She said Hamilton had the fastest growing Māori population so there was plenty of scope for more choices for those learners.

Under-Secretary for Education David Seymour said the charter school backers were among 26 groups that wanted to start charter schools next year. 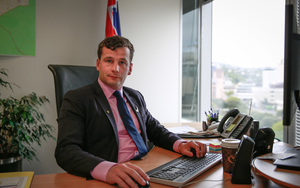 He said the government did not consider whether Napier and Hamilton needed more schools.

"We are putting schools in these areas because people applied to operate them and because as part of their application they have been able to express community support and demand," he said.

Mr Seymour said charter school sponsors had made heroic efforts to set up and run their schools despite relentless attacks from other parts of the education sector.

The Post Primary Teachers' Association (PPTA) said charter schools in the United States had increased segregation between different ethnicities and there was no place for them in New Zealand.

"We feel like this has gone on long enough. Charter schools don't work, and they don't belong in New Zealand. We question the motive behind opening more before any genuine evaluation of the policy has taken place.

"This is symptomatic of the government's evidence-free education plan.

"Public education is what we need in this country, not more publicly-funded privately-run unaccountable charter schools," Mr Lumbreras said.