The MP for Waitaki is taking up the proposed closure of Fairlie's only bank with Westpac's national managers. 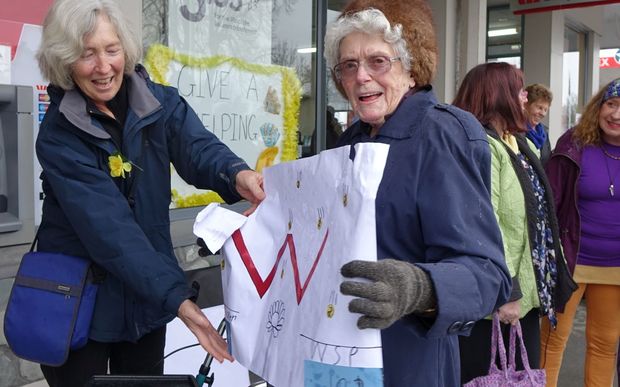 Fairlie resident Gwen Patton was one of those taking part in the protest against Westpac closing. Photo: RNZ / Conan Young

The Westpac branch is one of 19 the bank is considering closing in small towns around the country. About 200 residents of the Canterbury town turned out yesterday to protest against the proposal.

During the protest Mackenzie District Mayor Claire Barlow explained that many farmers in the area were used to banking cheques, and many older people were not familiar with, and did not trust, online banking.

National MP Jacqui Dean said many people relied on being able to walk through the door to do their banking, and the bank's closure would fall most heavily on older people who were not good with computers. But she said she understood why the bank actions.

"I understand absolutely they are running a business. I also want to point out to them maybe they do have a moral obligation to look after these smaller centres where they have customers who have been very loyal over a number of years."

Ms Dean said she was worried that if the bank closed, other businesses would lose out.