Police have praised a Czech woman who stayed at a Department of Conservation (DOC) hut for several weeks after her companion's death, saying she made the right decision to stay put.

The man - also a Czech national - died while walking the track with the woman, who was rescued yesterday afternoon after surviving for a month in the Lake Mackenzie Hut. 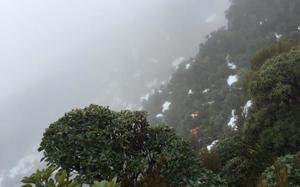 The area where the man fell Photo: Supplied / NZ Police

A recovery operation for the man's body has been delayed by poor weather and rough terrain, and will resume in the morning.

Police and LANDSAR began a search for the pair after the Czech consulate alerted them that they were missing.

Otago Lakes Central Area Commander Inspector Olaf Jensen told a news conference in Queenstown that the woman waved down a helicopter that had been looking for her, and had made signs in the snow seeking help.

Mr Jensen said the pair set off on the track on 26 July and the man had fallen on 28 July. The woman spent several days in the open before making her way to the hut, which was around 2km away, three days later.

She had remained there since then and wasn't discovered earlier because no one had been through the hut, he said.

Given the woman's physical condition and injuries, as well as the area's avalanche risk, Mr Jensen said she was unable to walk out and had made the right decision to stay put.

"She's done the right thing and recovered from her ordeal and didn't put herself at further risk."

Mr Jensen said the pair were in their late 20s and early 30s and had been travelling in New Zealand since January.

The pair's next of kin had been told of the situation.

Mr Jensen said the pair had some experience in the back country and were equipped for a walk, but the conditions had been quite severe.

The woman was able to locate food and firewood at the hut, but had been unable to get the hut's radio working, he said.

She had suffered some minor frostbite and mild hypothermia but Mr Jensen said she didn't need treatment at hospital.

The woman was relieved to be rescued and had undergone a traumatic experience, he said.

DOC Wakatipu operations manager Geoff Owen said the woman was in remarkable condition given her experience.

"She is alive, she is with us, she's on a recovery path and we're certainly doing our best to support her as she gets through these few days."

Mr Owen said the woman spoke little to no English, but the Czech consul happened to be in Queenstown.

The woman was being well looked after by the local community, he said.

"She was checked last evening in hospital, and I guess given the best bill of health I guess that she could receive she could at the time, and is now being well cared for locally."

Mr Owens said they were now waiting for the woman's family to make arrangements to come and support her.