The former chairman of iwi organisation the Wellington Tenths Trust is facing alternative charges of fraud and corruption in the High Court. 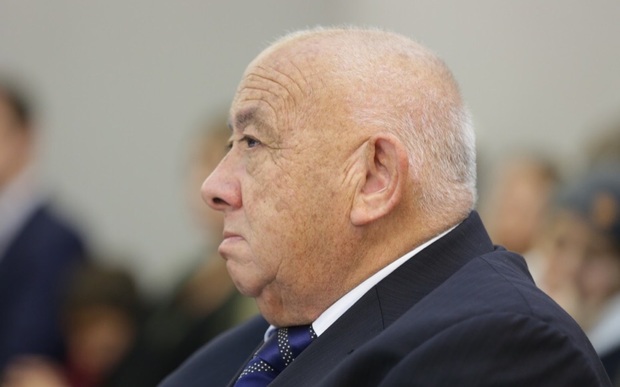 It is the second time Sir Ngatata Love has fallen ill during the trial. Photo: RNZ / Rebekah Parsons-King

The Crown says Sir Ngatata sold his influence to a property developer, which subsequently paid $1.5 million into a company run by his partner, Lorraine Skiffington.

Most of that money is said to have been used to pay down a mortgage on the couple's home.

It was the second time the trial has taken an unscheduled break due to Sir Ngatata's health.

He was taken to hospital early on in the trial with a heart problem and was excused attendance for two days.

After today's adjournment, he returned to court to continue being cross-examined.

Earlier in the trial a witness said that Yellowstone, a company owned by Sir Ngatata's son Matene Love, had been paid $150,000 in return for giving the developers first right of refusal on the Pipitea Street project.

But during cross-examination today, Sir Ngatata said he did not know his son had a company and he had not introduced his son to the developers.

His son was not reporting to him on the project and he did not know about arrangements his son made, he said.

Kerry Knight, a fund manager who had been involved in the Pipitea Street project, gave evidence earlier in the trial that Sir Ngatata had told him his partner, Lorraine Skiffington, would act as the interface between the Tenths Trust and the developers.

Sir Ngatata denied that today, saying that had been Mr Knight's suggestion.

He was also asked about his involvement in a house purchase with Ms Skiffington.

He had agreed to help her in the purchase of the house "on the understanding I'd be taken out as soon as arrangements were made for her to sell her house," he said.

"It wasn't a long-term ownership commitment."

He was not involved in aspects of the sale process, he said.

"As a purchaser who signed the property agreement you'd have been consulted before the vendors' solicitors were told it was unconditional? No."

Crown prosecutor Grant Burston showed him bank records, including a statement showing a $90,000 deposit on the property had paid out of an account in his sole name.

But Sir Ngatata said he didn't have an account at Westpac and he did not know how a copy of his driver licence notated 'from Dr R N Love' came to be faxed to the bank.

"I would have been asked to by Lorraine Skiffington or Shaan Stevens. I can't say."

Two character witnesses gave evidence, including Sir Wira Gardiner, the founding director of the Waitangi Tribunal and founding chief executive of the Ministry of Maori Development.

Sir Wira Gardiner told the court he had known Sir Ngatata for more than 30 years and he was a man of the utmost integrity.He said not once in all those years had Sir Ngatata mentioned remuneration or pecuniary gain, or otherwise sought advantage for the things he did.

Former Council of Trade Unions president Ross Wilson said he had first met Sir Ngatata in the 1990s and he had never had any reason to question his integrity.

"He's a person I admire for his character and achievements and leadership over many decades and I have no reason to consider him anything other than honest and principled."