A Dunedin museum's attempt to reunite a soldier's identity tag with his family - a century after he disappeared in the First World War - has taken another twist. 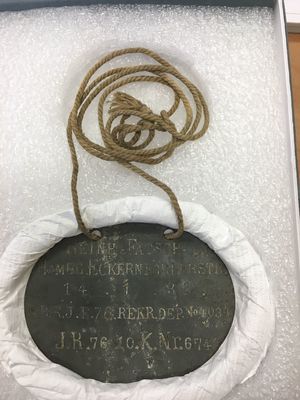 The tag belonged to a young soldier from Hamburg involved in the Battle of the Somme in 1916, and it was taken and traded among New Zealand troops before being bought back to Dunedin by a soldier.

It was given to the Toitū Otago Settlers Museum last year, which is sending it back to a museum in the German city in the hope of reuniting it with the man's family.

The museum's curator, Seán Brosnahan, initially thought the man had been killed or went missing in action.

But German military historian Robin Schäfer said he discovered that the man, Reinhold Fätsch, had actually been taken prisoner.

"During the First World War, every two weeks the German government published a casualty list, where all soldiers who were wounded, killed or missing, were registered so the families at home knew what happened to their loved ones. Mr Fätsch was first registered on that list in September 1916 as missing, but two months later, he was reclassed as being taken prisoner.

"So at first his regiment didn't know what happened to him, they didn't know if had been torn apart by a shell or if he'd drowned in the mud. So it was only until later, they knew that he had been taken prisoner, and they corrected the list, and he survived the war."

Mr Schäfer said the solider ended up running a successful oil business up until the mid-1930s in Hamburg.

He said Mr Fätsch surviving meant it may be more likely that he has living relatives to give the tag to.

However, the chances would still be slim, he said.

"Due to our privacy laws. According to my own research this chap died a long time after 1938, so his file will be closed for the general public for at least 70 or 80 years. That means you can only get access if you are family or related by blood, so I don't think that anyone would be able to trace living members of the family," he said.

"And even if they do, the German perception of the First World War is much different to that of the average Englishman, New Zealander or Australian. We hardly have a connection to that war. They [the Germans] are not interested, they do not know a lot about it and are not keen to learn about it. Most German families are actually surprised when they hear their grandfathers fought in that war."

The dog tag is expected to arrive in Germany by 15 September, which marks the centenary of the New Zealand Division's introduction to the Battle of Somme.