More than 2000 same-sex couples have wed in the three years since it was made legal on this day in 2013. 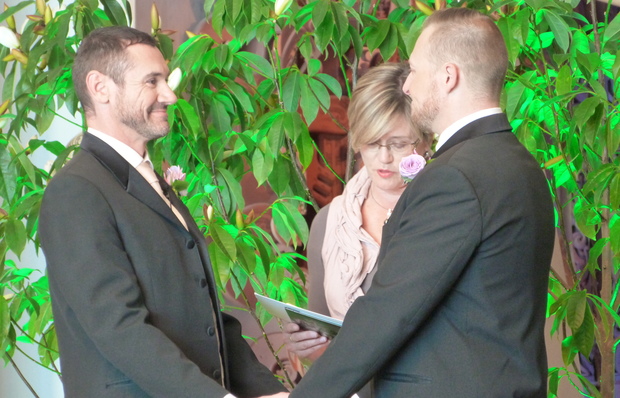 Paul McCarthy and Trent Kandler were among the first same-sex couples to wed after the bill passed in 2013. Photo: RNZ

The bill legalising same-sex marriage passed its final reading in Parliament in April, 2013, and came into effect on 19 August, 2013.

It said people can marry, regardless of their sex, sexual orientation or gender identity.

Almost 970 of those couples have travelled from abroad to marry here.

Labour Party MP Louisa Wall, who sponsored the Marriage Amendment Bill, said it was satisfying to know a piece of legislation that really mattered was making a difference.

"All of the hard work that went into the bill has been worth it for us as a country, it shows others we believe in fundamental human rights, that we are all born free and equal.

"I get mums come up to me and tell me about their children who have been able to come out as gay because the bill started a public conversation," Ms Wall said.

She said she underestimated the number of overseas couples that would come here to marry.

"The bill is contributing to the tourism industry with all the couples coming to wed, they spend about $30,000 on the wedding and then come back for anniversaries as well."

Ms Wall said the bill had been hugely positive, but one problem had come out of it.

"An overseas couple can come and get married here, but for them to legally get divorced one of them has to be a resident, otherwise if they live in a country that doesn't recognise same-sex marriage it is not legally binding there.

"We didn't future proof the bill but the government is looking into it," Ms Wall said.

Francesca Jago said business had been going really well, but she had noticed most of their same-sex couples were coming from overseas.

"Most of our couples come from Australia, it is great to give them the opportunity to get married and have it legalised here, even though it won't be legal in Australia.

"They come here to get the piece of paper, they want to show they are in a committed relationship and that they're accepted by country even if it is not their own," Ms Jago said.

She said New Zealand's beautiful scenery was a bonus, with couples opting for outdoor weddings.

"When we started in 2013 we went to a wedding show and while most people were happy to talk to us some people were taken back and would ask things like if we were both going to be brides, so we saw a gap in the market and decided to start Queer Eye Weddings.

Ms Jago said there would always be stereotypes, but legalising same-sex marriage had changed perceptions.

"When we are organising weddings or people are talking to me and my partner they don't bat an eyelid, things have changed."

Rainbow Wellington represented and advocated for people in the lesbian, gay, bisexual and transgender community.

Group chairperson Rawa Karetai said the statistics were amazing and showed the community was taking the right to wed seriously.

Mr Karetai said being able to marry gave same-sex couples better access to adoption, which was more difficult under civil-unions.

"The bill had so much support, it was all about people realising that people in the lesbian, gay, bisexual, transgender community want to show their love through marriage as well."