All Black great Sir Colin Meads has been diagnosed with pancreatic cancer. 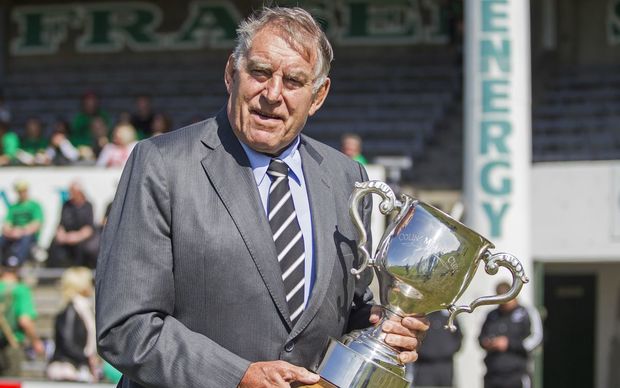 Sir Colin, 80, was diagnosed this week after six months of ill health.

Last month he was admitted to Waikato Hospital over concerns about a kidney illness.

In a statement issued by the New Zealand Rugby Union on his behalf, Sir Colin said he had received great care while undergoing tests at the Te Kuiti Medical Centre.

"I've been crook for the past six months, and having all sorts of tests," Sir Colin said in the statement.

Sir Colin thanked everyone for the many messages of support and asked for time to fight his illness privately.

"Thanks to all the people from all over the world for the cards and well wishes, but especially to our great friends locally - their support has been immense."

He said it was a hard time for his wife and their children and grandchildren.

"It's bloody hard for Verna, the kids and grandkids. The kids are all close to their mum and each other, and we'll come right together.

"Thank you to everyone for their concern. But for now, it's about me fighting this, and we want to get on with what we are facing privately, as a family."

Sir Colin was the key forward in All Black teams for 15 years and was nicknamed Pinetree.

He continued to be a coach and administrator after retiring from playing in 1971.

Former All Black and long-time friend Ian Kirkpatrick said Sir Colin has a tough fight on his hands.

"It's not that good news, but knowing Pinetree and knowing what he's like he'll give it his best crack and he'll fight it - fight it till the end.

"You know, it's sad news but he will, he will give it his best shot and that's all he can do really."

He said Sir Colin had given no hint at his health problems when the pair spoke in March.

"He probably may have known, but knowing Pinetree he probably hides a few things - but he didn't mention anything then."

Sir Colin had huge support from his family, including his children and grandchildren, and that would be a huge help to him.

"He's fought a few battles before so, you know, it's just another one and to do with health issues so it's probably a bit strange to him so we just wish him well."

Kirkpatrick said he probably spoke for New Zealand in saying he was sorry for Sir Colin's predicament.

"And just you give us your best shot Pinetree, and we wish you all the very best."

"It is with great sadness we hear of the seriousness of his condition.

"We knew Sir Colin had been ill for some time however the latest update on his condition is concerning to us all but we remain hopeful that Sir Colin's strength and determination will help him through."

He said the rugby union's thoughts were with Sir Colin and his family.