Days of debate on Auckland's Unitary Plan have begun with a surprise decision that excludes members of the city's Independent Māori Statutory Board from deliberations. 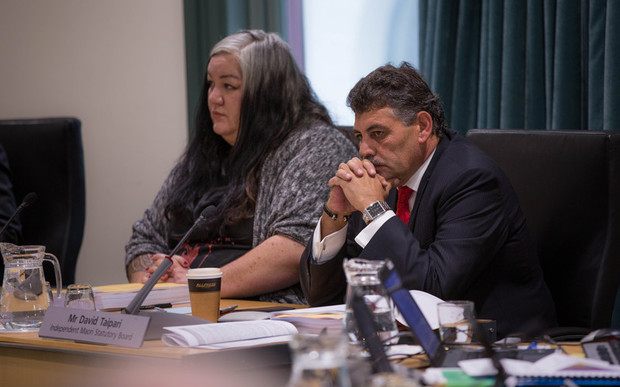 Independent Māori Statutory Board members Liane Ngamane and David Taipari have agreed not to be part of the debate on Auckland's Unitary Plan. Photo: RNZ / Cole Eastham-Farrelly

The board members have agreed to let the debate shift from being heard by Auckland Council's development committee, where they sit, to the full council, which they are not part of.

It was not clear what occurred since the full council voted 13-8 a fortnight ago to keep the Unitary Plan debate before the development committee, prior to a full council sign-off.

Mayor Len Brown made a vague reference to behind the scenes negotiations.

"Over the last few days there has been a lot of discussion particularly with the Independent Maori Statutory Board, on what their position would be, given all the challenge of interpreting conflict or non-conflict," Mr Brown said.

Some councillors had challenged the board members, saying conflicts of interest should exclude them.

Statutory board chair David Taipari told the meeting he had no conflicts of interest.

He also rejected the assertion in a letter circulated to all councillors, that he held a chief executive role in an iwi body.

He resigned from that role in 2010 upon joining the statutory board, he said.

"I think there's a question around behaviour, but ... from our point of view, our role is to assist council to design and execute policies and plans, and we think we've done that."

Another board member, Liane Ngamane, said the decision might have averted the debate over the Unitary Plan turning into a circus.

Lobby group Democracy Action had written to councillors opposing the board's involvement in the plan debate.

Outside the meeting, its founder Lee Short praised the unanimous decision to shift the debate.

"That's a huge win for democracy, the council has been very sensible."