A firefighter arrived at the Bay of Plenty crash that killed five people last night to find he knew the victims, one of whom he lived with.

The car carrying the five men was pulling out from their work place, Aongatete kiwifruit coolstore, on to State Highway 2 in the Bay of Plenty town about 8pm at the end of their shift when their car was hit by an unladen logging truck.

Police said the truck driver was distraught but not physically hurt. Police and fire crews closed the road for four hours following the crash.

The Wesleyan Church of Tonga released the names of the men killed. They were Sitiveni Vaipulu and his son Koli Vaipulu, Samiuela Taukatelata, Halani Fine and Sione Teulaka.

Simione Vakasiuola, an elder of the church, was one of the firefighters called to the crash.

"It was a very very sad thing to look at, I mean, you look at how people you know died."

He said he had to leave it to colleagues to recover the bodies.

All the victims were Tongan, with four in New Zealand on seasonal work visas.

The Tongan prime minister, Akilisi Pohiva, in New Zealand at the moment, is due to go to Katikati tomorrow.

The coolstore operator, Allan Dawson, said the coolstore was closed for business today, but people were gathering, supporting each other and eating.

He said counsellors and people from the Tongan community in Katikati were also there.

Earlier, he said many of the staff had been leaving at the same time and witnessed the crash.

"We're all really quite distraught at the moment," he said.

"I think it's all human error, there's a dip to the right, vehicles sort of suddenly appear out of that dip quite quickly and I guess that's what happened - they were trying to cross the road to turn right."

"One of them had been working with us for eight years, others for various lengths of time."

The packhouse would be closed down for the day, he said, and they were talking to everyone possible to inform people.

The company was doing everything it could to inform the families in Tonga, and would provide financial support to them. 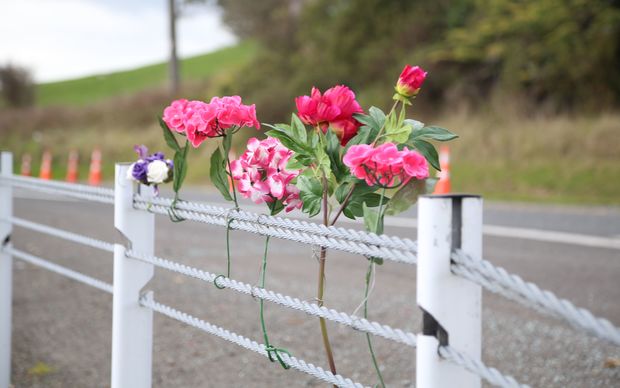 Flowers were left at the roadside where an unladen logging truck hit the car the men were travelling in. Photo: RNZ / Tom Furley

"There's some quite close ties between most of them in that group."

Support people and police were helping at the coolstore last night, with church members from Katikati also lending a hand.

Mr Dawson said he had made suggestions about the safety of the intersection to New Zealand Transport Agency before, and they had made "quite a few noises" about upgrading the intersection because it had quite a high accident rate.

Inspector Clifford Paxton was out at the scene last night and told Morning Report it was a tragedy for all involved.

"At this stage it's early days and our investigation will look at all aspects of it. But what we know in terms of that particular stretch of road is it can be quite unforgiving - there's significant traffic flows, it's quite narrow, it has deep run-off-the-road areas - so people make mistakes, it can end in tragedy.

"There's also a lot of work scheduled on into the future in relation to that piece of work, but we also need our communities to take all due care."

Western Bay of Plenty Mayor Ross Paterson said the community had not had a crash of this magnitude for 20 or 25 years, he said.

"The Tongan community is very much a part of Katikati, and has been, they are part of the church side of things and they are also very strong in supporting the local rugby club."

He said the road served the Port of Tauranga and had a high number of vehicles on it both day and night.

Nearby resident Kevin Ward raced outside when he heard the crash - he said the damage to the car was shocking.

"It's taken a full side-on hit. The driver's side and behind the driver's passenger seat, that's been all crumpled up, you know?

"So I went out there and the car was pushed onto the opposite side of the road, up onto the bank, and there was nobody moving in the car."

The Serious Crash Unit and Commercial Vehicle Investigation Unit were at the scene.