Today's rescue of six people from snow in Kahurangi National Park is another reminder for people to check the weather before venturing into the wilderness, police say.

Sergeant Malcolm York of Nelson Police Search and Rescue said the group, including four young children, were airlifted to safety this morning before the weather closed in again.

He said the two adults, two three-year-olds and two five-year-olds from two different families were found this morning cold but otherwise okay.

The families declined to comment when they arrived in Nelson, but the two men who headed the group on the weekend adventure looked tired and dishevelled as they walked past waiting media.

Mr York said they were well prepared, but made the mistake of not checking the weather.

"The [Cobb Valley] road was showing as open but there was a snow warning for the area and they never picked that up," he said. 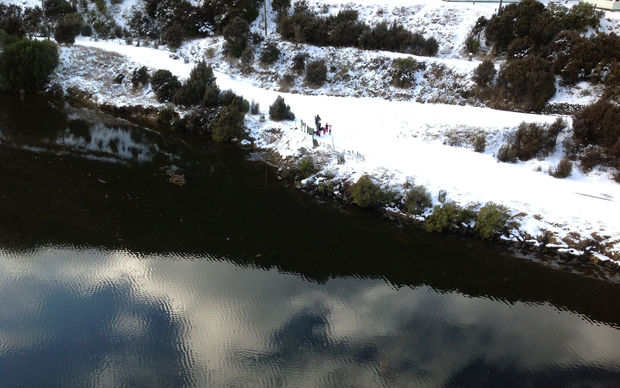 The two families were picked up by helicopter after they used an emergency phone in the area. Photo: Nelson Marlborough Rescue Helicopter

It was a popular place for hikers, but its mountains and valleys, stretching from Golden Bay to Karamea on the West Coast, could be hostile in winter.

Mr York said the group had planned a one-night stay in a hut on Saturday, but became trapped by snow once weather conditions worsened when they tried to return home.

He said police were alerted to their situation yesterday afternoon, after the group had become stuck in four-wheel drive vehicles. 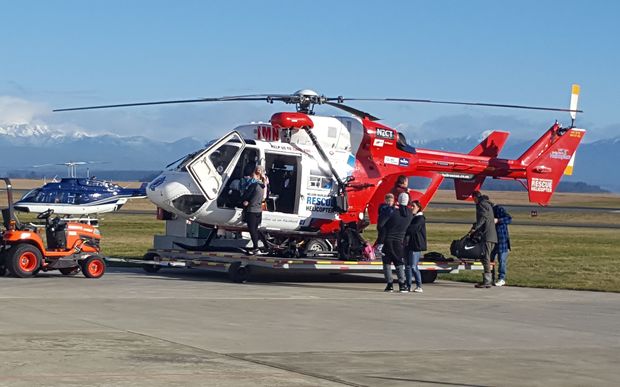 The group was flown out of Kahurangi National Park to Nelson after sheltering in a deer hut overnight. Photo: RNZ / Tracy Neal

"It was in the Cobb Valley dam area which is a very high location. They were able to get to an emergency phone that's in the area and call out for some assistance.

"One of their vehicles had become stuck in some snow and had then gone into a ditch and they were unable to get themselves back down again," Mr York said.

He said their situation was not serious but there was concern for the four young children in the group.

"Medically they were fine - just a bit cold after their night sheltering in one of the huts up in that area. They had firewood, they were able to look after themselves, and they had all the right safety equipment with them."

Mr York said the road to the area in the Cobb Valley is now completely snowed in and impassable.

Nelson Marlborough rescue helicopter crewman Ernie Bryant said the conditions this morning were okay for a helicopter rescue, and they were able to land at a site near where they group was waiting. 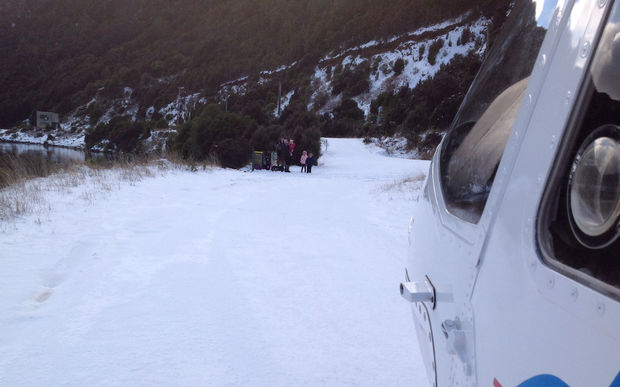 Mr Bryant said they used a break in the weather to retrieve the group. The weather was due to close in again by this evening.

"There was a bit of wind; clouds on the tops of the hills like you get at this time of the year. Snow covered the ground but it was nothing outside our normal (operating) parameters.

"With the age of the children we didn't want to leave them there another night, and when it's potentially hard for us to get in because of weather, so we decided to pull them out this morning," Mr Bryant said.

Mr York said conditions could change rapidly and people could quickly find themselves in trouble.

"Police would really like to get the message out to everyone who's using the backcountry, and especially four-wheel driving.

"It's winter, we can expect snow in the high country, you must check the weather before you go and make sure you're well equipped."

Severe weather warnings have been lifted from parts of the country, though more snow is expected to fall.