Several Auckland councillors have unsuccessfully tried to exclude Māori representatives from the final debates on the city's Unitary Plan. 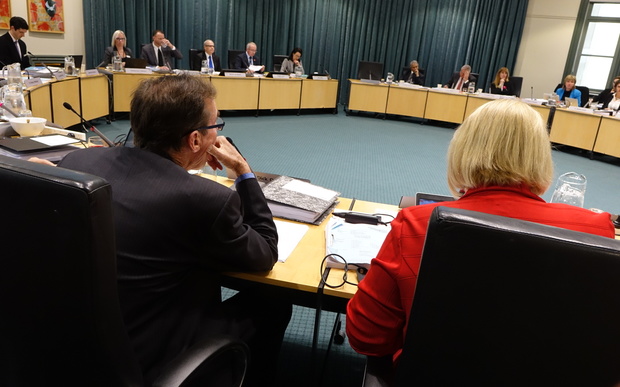 The revised version of the plan, which sets rules for future development, was released yesterday by a government-appointed independent hearings panel, after 249 days of submissions.

The Auckland Council must make its final decisions on the plan within 20 working days.

At a council meeting today, Dick Quax, Cameron Brewer and Mike Lee used research material provided by lobby group Democracy Action to suggest the Independent Māori Statutory Board (IMSB) might be compromised because of its involvement in the hearings on the plan.

Today's debate was whether next month's final deliberations on the Unitary Plan should be before the full council's governing body or its Auckland Development Committee.

All councillors sit on both - but appointed members of the Māori statutory board sit only on committees, and not the full council.

Orakei councillor Cameron Brewer was the first to question whether the board had compromised itself by taking part in the independent hearings panel's process.

"I just want to seek assurance that legal advice will be given or proffered to the six IMSB members that are senior office-holders of trusts and iwi authorities who have submitted on the Unitary Plan," he said.

"The hundreds of different points of submissions that the IMSB has made, I believe, render them completely out of the process."

Mr Quax continued the line against Māori participation in the debate next month.

"The problem I have, apart from the conflicted position that the Independent Māori Statutory Board has, is that it defies democracy to have people who are unelected, and who are not accountable, sitting in judgement of a plan which is of huge importance to Auckland," he told today's meeting.

The material used to question the statutory board's right to vote was supplied by Democracy Action.

Its founder, Lee Short, told RNZ News he had shared research with a group of councillors he was working with, and would continue lobbying against the board's inclusion.

Councillor Cathy Casey was one of the majority who argued it was proper for next month's consideration of the plan to include the Māori representatives, saying their voice was important.

"If you say no to the IMSB you're effectively saying no to the Māori perspective being heard. Of course there'll be rules around conflicts of interest. I actually think it's insulting to be having this debate," she said

RNZ News this week published a submission made to the independent hearings panel by councillor Sharon Stewart, in which she described possible requirements to consult with Māori as a form of economic and social apartheid.

Mrs Stewart was one of the minority today who voted unsuccessfully to block the statutory board members' continued role by shifting the debate away from the development committee on which they sat.

This was in spite of advice that had been offered a short time earlier by the council's governance director: that councillors who had made such submissions should consider whether they were conflicted and whether they should vote today.

The chair of the Māori statutory board, David Taipari, said he didn't believe he and fellow member Lianne Ngamene had conflicts of interest, and if any declarations were needed they'd be made at next month's meetings.

The council voted 13-8 to keep deliberations on the plan with the development committee.

The formal sign-off will be taken by the governing body, after the committee's deliberations.