One of three Gisborne memorials of Captain James Cook could be replaced following repeated vandalism. 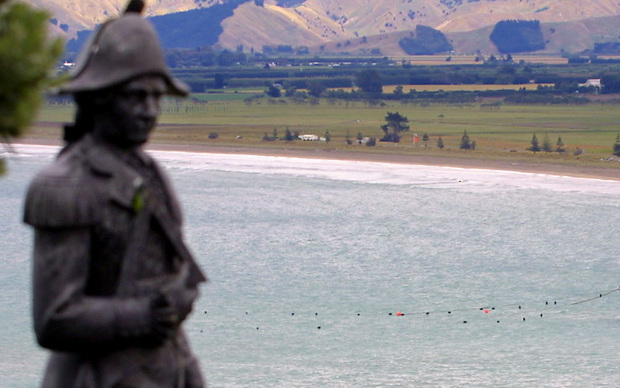 A statue depicting Captain Cook on Gisborne's Kaiti Hill has been recently vandalised with red paint amid calls to replace it. Photo: AFP

One of the statues, on Kaiti Hill, has had red paint drawn across its face and underwear painted on, while two others on the waterfront - of Cook and Young Nick - have recently also been vandalised with paint.

A Gisborne District Councillor, Josh Wharehinga, says the council is considering replacing the Kaiti Hill memorial with a statue of a renowned Maori chief.

Mr Wharehinga said the depiction of the famed British explorer was incorrect.

"It's actually not Cook, it's done in the likeness of a French general of actual unknown name and history.

"At the moment there's been discussion in the community about taking that guy down and erecting some po and some memorials to other chiefs and navigators of note from Gisborne - Raka ai Tane , Kiwa Pawa etc."

He believed the vandalism of all three statues with red paint was a deliberate attempt to generate debate about Cook's legacy, which is being questioned in the lead-up to the 250th anniversary of his first landing in New Zealand.

Mr Wharehinga said he some people had told him they wanted a fair portrayal of Captain Cook.

"By in large what I have heard from the community is they don't want rose-tinted stories about this joining of two people, they actually want ... a Game of Thrones description of how things occurred," he said.

"It's really been quite an interesting community conversation. There are some saying, on the one end 'no, we need to keep all of these up not matter what the mistakes' and at the other end we have people in the community saying Cook was a murderer.

"He was hand-selected to captain the Endeavour ... but on the other side of that he turned up to up to Tūranganui-a-Kiwa [Poverty Bay] and killed six people upon first coming here."