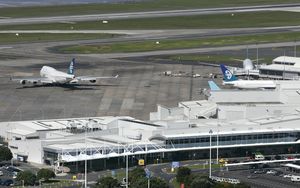 Teremoana Kimiangatau, who worked in accounts for the company for 18 years, appeared in the Auckland District Court today on three charges of obtaining by deception.

The charges were brought against her by the Serious Fraud Office.

Kimiangatau had transferred funds from the airport's bank account into her own by doctoring invoices and altering client information.

The airport dismissed her in February after noticing some unexplained financial transactions.

Serious Fraud Office director Julie Read said Kimiangatau was able to pass the invoices for authorisation and make changes to the client information without being challenged.

She said a serious approach to checks and balances was needed to detect anything similar in the future.

Auckland Airport said it welcomed Kimiangatau's guilty plea, and had made changes to its internal processes and controls.

Kimiangatau will appear again in the same court in November.