Disgruntled neighbours of the Iranian Embassy in Wellington say they could be losing out on carparks because of diplomatic back-scratching. 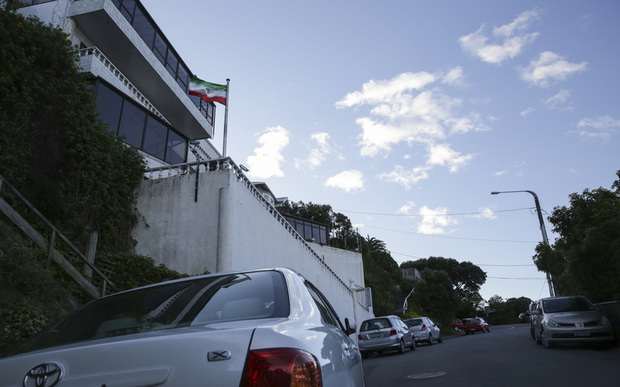 The Iranian Embassy wants access to more carparks on Te Anau Road in Haitaitai. Residents complain there is not enough parking as it is. Photo: RNZ / Rebekah Parsons-King

Last year, the Iranian Embassy asked for exclusive rights to three carparks on Te Anau Road in Hataitai, but local residents protested, saying parking spaces on the narrow street were hard to come by.

Now, residents say the Ministry of Foreign Affairs and Trade (MFAT) is putting pressure on the council to approve the request.

The dispute dates back to mid-2015, when the Iranian Embassy requested exclusive access to three on-street carparks in front of its property.

The embassy told RNZ News it requested the carparks as reciprocal treatment for privileges extended to New Zealand diplomats in Tehran.

"The most important reason for the request is that non-authorised vehicles are not allowed to park in front of the New Zealand Embassy in Tehran and this restriction has been imposed 24/7."

But a local resident, Matt Flannery, said the embassy didn't need the carparks, it just wanted them - and parking spaces on the narrow Wellington road were already hard to come by.

"To this point there's never been a demonstrated need for them - it's simply a want, and what we've seen here is MFAT bowing down to the desires of the Iranian Embassy, without actually considering any of the consequences on the residents."

In an email to RNZ News, another local resident, who did not wish to be named, said MFAT pressured council officials to approve the carpark hand-over.

She cited emails provided under the Official Information Act, which Mr Flannery requested earlier this year.

In the emails, an MFAT representative appears to ask the New Zealand police to provide another reason to give up the carparks.

"I seem to recall in the past that DPS [Diplomatic Protection Service] provided reports regarding security issues in support of carparking in front of missions.

"Are you able to provide a comment or report on whether New Zealand police thinks there are valid reasons for security concerns outside the Iranian Embassy?"

The police supported the embassy, and provided a letter that suggested giving up the carparks could help security.

"By designating the whole frontage of 151 Te Anau Road, on the embassy side of the street, as 'Diplomatic Car Only' parking, this would make it impossible for a suspicious vehicle to be left there without it quickly being noticed and reported to police, or the Wellington City Council. This would significantly enhance safety, and security, at the venue."

However, the Iranian Embassy has never mentioned safety as a factor - and Mr Flannery said there was no evidence of any security concerns.

"There has been no demonstrated safety or security argument presented. MFAT haven't substantiated anything, and nor have the Iranian Embassy been able to provide anything to specifically address it."

Residents were keen to stress they didn't have a problem with the embassy - who they said was a good, amicable neighbour - they just didn't think good process was being followed.

The council's transport and urban development committee will make a decision on the carparks in the next two months.