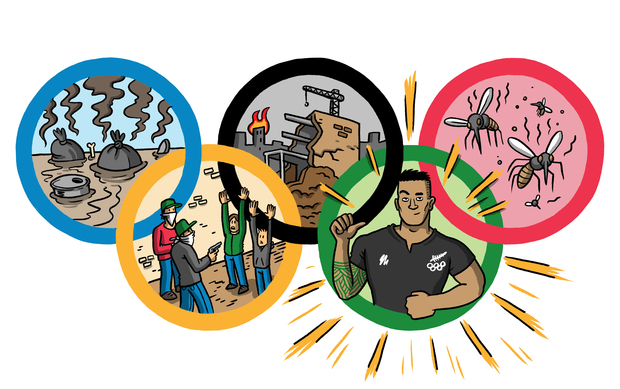 Just over three weeks to the start of the world's greatest sporting competition, the Games of the XXXI Olympiad, in one of the world's finest cities. Let the nervous excitement begin.

That's one way of putting it.

Preparations have been turbulent, and there are numerous causes for concern.

Come on, don't they say that before every big sports event?

Perhaps. But this time around things look pretty distressing.

Apart from the late-running construction of facilities and transport links, Rio faces withdrawals over the Zika virus, doping controversies, contaminated waterways and a surge in crime. The city is facing a financial crisis, the country a corruption scandal and there's ongoing political upheaval.

Yeah but will Sonny Bill Williams be there?

Good point. He will.

What's the latest on Zika?

A handful of athletes have pulled out, mostly rich golfers whom some suspect didn't really fancy the whole five-ring circus anyway. The Brazilian health minister has said there's "almost zero risk" of contracting the virus, pointing out that cases have dropped dramatically, while mosquito numbers will plummet further in August.

Just for those at the back - Zika?

A virus, transmitted mostly through mosquitoes, who are all evil, and which can have an impact on foetuses carried by pregnant women. One of the concerns with the Brazilian strain of the virus is that still relatively little is known about it. This is a large part of the reason one public health expert said going ahead with the games as planned risked causing "a foreseeable global catastrophe", while a group of 150 academics called for the games to be postponed - an appeal rejected by the two major authorities on such matters, the World Health Organisation and Mike Hosking.

And what's up with Rio?

The state of Rio de Janiero declared a "public calamity" last month, permitting an emergency government bailout to avert what the governor at the time called "a total collapse in public security, health, education, mobility, and environmental management". The $US900 million is being used to bankroll overdue facilities, shortstaffed and under-resourced hospitals, grave shortages in police, that sort of thing.

Will crime rates be addressed?

Authorities say criminals will be squashed like mosquitoes with an influx of 85,000 officers at the end of the month. But there's been quite a spike in violence this year. A reported 76 people have been hit by stray bullets in Rio already, with 21 dying.

Russian track and field athletes are banned from competing after authorities judged their administrators had not done enough to eradicate state-sponsored doping. Some may still be able to compete if they can show they've been subject to authorised anti-doping measures outside Russia.

Can hardly blame it on Rio.

No. But Rio did have to close its own anti-doping lab after failing to conform to international standards.

Sonny Bill Williams is coming, though.

What about the state of the waterways?

There's a bit of an untreated sewage issue. According to the Associated Press, at many of the region's beaches "the surf is thick with putrid sludge". And mysterious super bacteria have been detected on beaches, too. According to one unfortunate German sailor, "It feels like there's some alien enemy entering your face."

How about the lagoon? Will our mighty rowers be all right?

An Associated Press investigation found the Rodrigo de Frietas Lagoon to be "so contaminated with human faeces" that participants "risk becoming violently ill and unable to compete".

Oh. What are they meant to do?

Not swallow the water and wash. A lot. Maybe it's a metaphor for Brazilian politics.

The president, Dilma Rousseff, was last month suspended after congress voted to impeach her over charges of using public funds to cover deficits. She is not accused of corruption or serious crimes, but a majority of congress is.

Anything else to worry about?

There's the body parts washing up on a beach, and the Olympic mascot being shot and killed.

The mascot's body parts washed up on a beach?

No. Human remains washed up on Copacabana, just down from the beach volleyball site.

Her name is Rio and she dances on the sand.

Nothing. What's this about the mascot?

Juma the jaguar, star of a pre-games torch ceremony, was shot to death after escaping her Zoo enclosure.

Is there anything at all to be positive about?

Of course. Brazil was assailed in the leadup to the Football World Cup a couple of years ago for being under-prepared and it was widely regarded as a jolly good time. Given the political and economic maelstrom the country confronts, a good bit of Olympic spirit could prove a timely tonic: a carnival of sport, with more than 10,000 athletes competing from 206 countries for 4,924 medals across 42 sports.

Also, the Rio 2016 president, Arthur Nuzman, said last week the games will "be a maximum success". Which is nice. And there's at least one good omen: a Spix's macaw, thought to be extinct in the wild, was recently spotted by a birdwatcher.

And how will New Zealand do at the event?

New Zealand will do very well. As long as they're careful about drinking water and insect repellent, the rowers and the cyclists and the sevens teams (feat Sonny Bill Williams) and Lydia Ko and Val Adams and the rest are set to have medals put around their necks and get given those weird bunches of flowers on the dais.

No: a more specific medal count.

High Performance Sport NZ is predicting 14 medals, one more than the record of 13. An international forecasting company is reportedly predicting, however, that NZ will win 23 medals, 11 of them gold

What do Toby & Toby predict?

Any thoughts on the NZ team uniforms and the "controversy" about their ugliness or otherwise?

No. The uniforms are a massive irrelevance. Unless of course NZ bags less than a dozen medals or the whole thing descends into a biblical zika-doused super-bacterial face-eating fireball, in which case they're wholly to blame.