A police raid that ended with officers fatally shooting a Hamilton man happened in a matter of minutes, a local business owner says.

Nick Marshall, 36, died after being shot by police during a drugs and weapons raid on a property in Frankton.

His father and partner have both posted on Facebook that he was unarmed when shot.

Police said Mr Marshall - who has not yet been formally identified - repeatedly refused to put down his weapon, and was shot by more than one officer.

They said a pump-action shotgun and a live cartridge were found where he was standing.

A scene examination was expected to take several days and, in the meantime, armed guards have been stationed at the cordon, which has been up since the shooting.

Assistant Commissioner Allan Boreham said at a news conference earlier today that officers identified themselves as armed police when they entered the property during the raid.

Mr Marshall picked up a long-barrelled firearm when they came across him, he said.

He continued to present the gun, despite being called on not to do so a number of times, and was shot, he said.

"They've ended up having to fire on him... there's been a number of shots fired, it's likely from the information we have at the moment that more than one member of the Armed Offenders Squad fired," he said.

"I don't have any information at this stage that he fired back."

Police said the shotgun and live cartridge were found "at the site where the deceased was standing".

But a man who said he was the shooting victim's father wrote on Facebook that his son was unarmed.

He said the police smashed his son's door down and shot him dead. In the Facebook post, he asked why they let "trigger-happy unskilled" people into the police, "then give them guns, shooting an unarmed man".

The man said his son was one of the gentlest people he knew.

A woman claiming to be the dead man's partner also posted on Facebook, saying her partner had not been armed or threatening.

She wrote she was in shock and still could not believe those who were supposed to serve and protect New Zealand were "cold blooded killers".

Police said the man was taken outside the cramped area after he was shot but, despite being given first aid, he died at the scene. 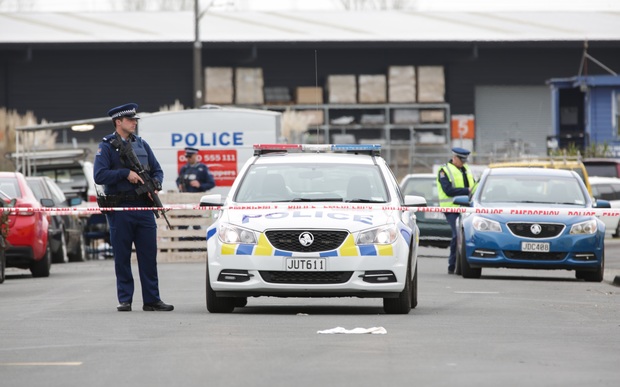 The shooting occurred during a pre-planned search warrant carried out by Armed Offenders Sqaud and Criminal Investigation Branch officers at a warehouse or workshop-type building on Grasslands Place in Frankton about 6.30pm, police said.

It was related to an investigation into the methamphetamine and firearms supply and gang connections were also a possibility.

A post mortem is set to be carried out, with the results expected later today.

Mr Boreham said there were some residential homes in the area, but it was mostly industrial.

"A lot of forethought was given to the tactics to be used, that's included to be not only the threat from a firearm but also any chemical threats."

"What is at this address will all be revealed as a result of the investigation so I can't reveal any of that information at the moment.

"It is always unfortunate when we have to use deadly force, that has been used in this case and now we need to find out what has happened."

Police said the Independent Police Conduct Authority had been notified, as was standard for such incidents.

Mr Boreham said police would continue investigating the scene for methamphetamine and firearms as the day went on.

Paula Simmonds said she witnessed the shooting and heard about three or four rounds go off.

She was picking up her dog at about 6.30pm from a dog daycare centre opposite the building where the shooting took place.

"And then the next minute there was police zooming down the road and they turned off their lights and then they shot into the place and my daughter and I were in the car and we said 'oh my god there's shots, there's shots fired', and so we locked the doors of course as you do and then watched it all unfold."

About 10 minutes later, an ambulance turned up.

"There was a lot of guns around and a lot of armed men and ambulance and Fire Service, it was all go."

Daya Singh, who owns a business across the road, said he saw police cars pull up to the property with lights flashing and officers shouting out to the people inside.

"They're still calling and then all of a sudden, we just heard them shooting. Bang, bang, bang - almost four times."

He had spoken with the man who was shot a few times in the past and he seemed like a nice person, he added. 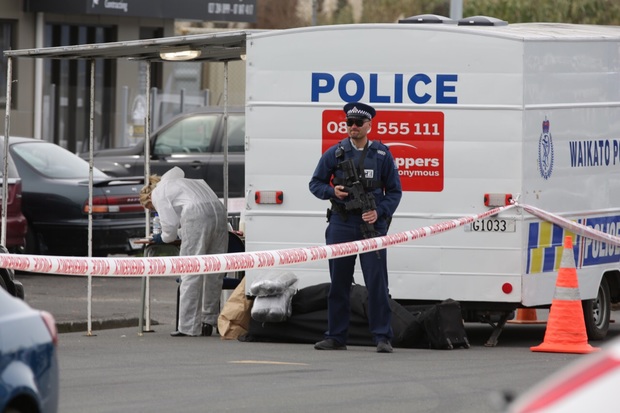 Police cordoned off the area overnight, and an incident control caravan was still parked outside this morning. Photo: RNZ/ Claire Eastham-Farrelly 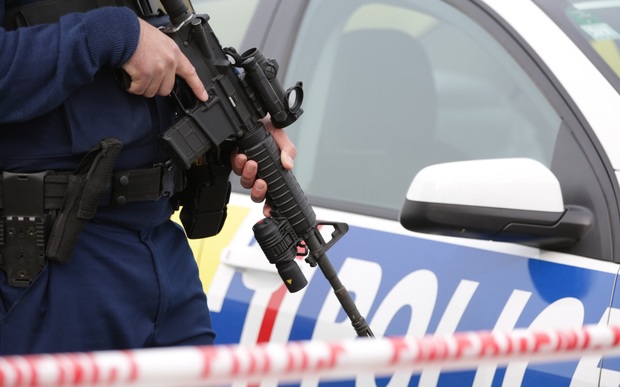 An officer holds a firearm at the scene of the shooting. Photo: RNZ / Claire Eastham-Farrelly