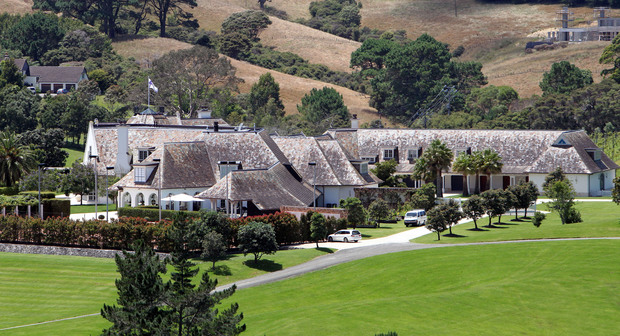 The 'Dotcom Mansion' is for sale. Photo: AFP

Mr Dotcom rented the 12-bedroom Coatesville property, which was raided by police executing search warrants related to attempts by United States authorities to extradite him in 2012.

The rent was $1 million a year.

Real Estate agent Barfoot and Thompson confirmed the property had been sold after being listed in February, but said the details of the buyer and purchase price were confidential.

The asking price was reportedly $35 million. The property includes 2375sqm of living space.

Described as one of New Zealand's most opulent properties, the dozen bedrooms include seven ensuites, with the master bedroom featuring a glittering, mirrored walk-in wardrobe. The property also has an Olympic-sized pool.

Mr Dotcom rented the property which was raided by police in 2012 as they executed search warrants related to attempts by American authorities to extradite him.

The rent was $1 million a year.

Salesperson Christina Tang said both vendor and buyer were delighted with the price agreed, but had requested privacy.

Mr Dotcom moved out of the house last year while facing ongoing legal costs from his efforts to avoid extradition.

The FBI was seeking to have him face charges of copyright infringement, racketeering and money-laundering along with three former colleagues.