Downpours in the upper North Island overnight led to flooding and road closures in eastern Coromandel, Bay of Plenty and north Auckland, while icy conditions caused problems in the South.

The problems have now eased and roads have reopened, but drivers are being warned to take care in icy conditions in the south. 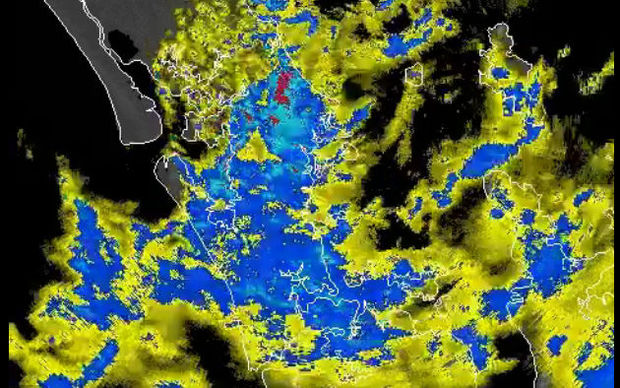 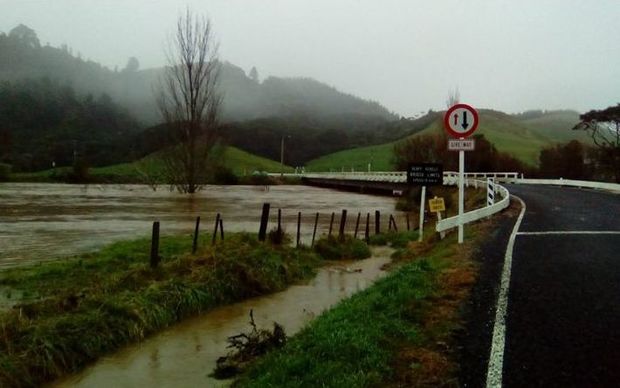 Coromandel civil defence controller Garry Tawler said nearly 180mm of rain fell in Tairua overnight, and slips and flooding had cut off everything to the north and south of the Coromandel township.

A king tide that peaked in Coromandel has now receded and there are no reports of any problems, civil defence says.

In north Auckland, the Fire Service had about a dozen callouts to properties in Rodney between midnight and 1.30am.

Four of those needed help to deal with flooded basements, a Fire Service spokesman said.

To share your pictures or video of the weather near you, please email to: iwitness@radionz.co.nz 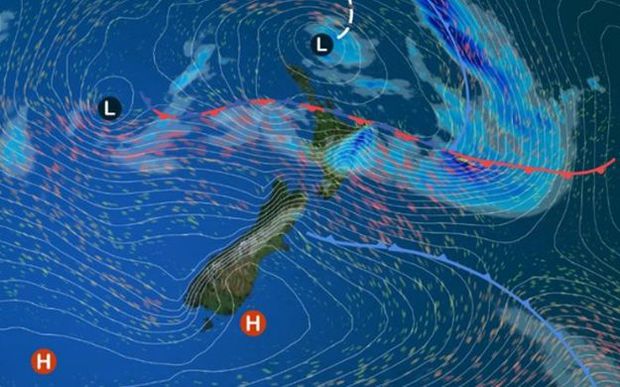 Weather sandwich: NZ is stuck between areas of low pressure to the north and building high pressure to the south, which is likely to mean gales across the centre of the country, MetService says. Graphic: MetService

Gale force winds are already hitting Buller and Westland, where gusts of up to 120 km/h are forecast in exposed places. A MetService severe weather warning of strong winds is also in place for Marlborough Sounds and the central North Island high country.

Icy conditions have caused flight delays and are being blamed for crashes on some South Island roads this morning.

Four early morning flights in and out of Dunedin were cancelled, and two arrivals were delayed until after 11am, an airport spokesperson said. Flights have since resumed.

State Highway 1 between Oamaru and Dunedin has re-opened after being closed for an hour while a truck that had tipped on its side was removed.

The driver has been taken to hospital with minor injuries.

Southern District police said they have attended more than 25 crashes due to ice and black ice on roads in South Otago, Gore and Invercargill.

Several crashes have also been reported in South Otago between Allanton and Waihola, with ice also a problem on roads between Outram and Kyeburn and Kyeburn and Palmerston.

The Clutha District Council has sent several trucks out to grit roads, but said drivers also need to be wary of gravel roads, which have turned into sheet ice in some places.

Police are asking motorists to drive to the conditions and allow greater following distances.

Motorcyclists and drivers of high sided vehicles are being urged to take care, particularly in South Westland.

The heaviest rain today is expected in the ranges of Hawkes Bay and Gisborne during the afternoon and evening. Up to 120mm of rain is possible in the Hawkes Bay ranges north of Wairoa.