A High Court judge has told former ACT leader John Banks that he was wrong to find the former MP's wife was not a credible witness. 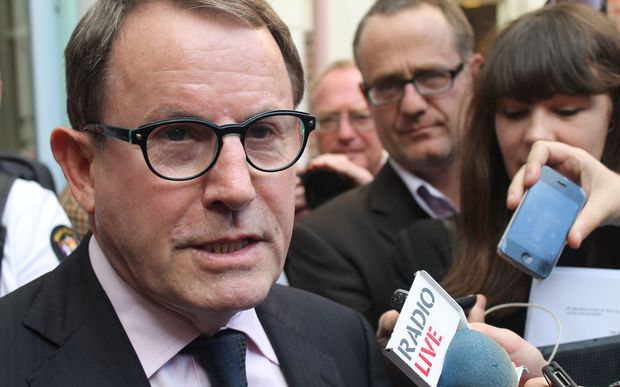 Mr Banks was back in the High Court in Auckland today, but this was a lot different to the last time.

Instead of being pelted with a bucket of mud as he attended court to answer a charge of filing a false electoral return, he was asking the court to award him $191,000 in costs.

The case goes back a long way. Police initially declined to lay charges, then retired accountant Graham McCready picked up the case before the Crown took it over.

The case pivoted on donations from SkyCity and Kim Dotcom to Mr Banks' failed 2010 bid to be Auckland's first supercity mayor.

Justice Wylie found that Mr Banks might have been careless in leaving SkyCity's name off the returns document but it could have been unintentional.

When it came to the Dotcom donation, it was a different story. Justice Wylie found Mr Banks knowingly filed two $25,000 cheques from Mr Dotcom as anonymous.

The court heard how the donations were discussed at a lunch meeting - where Mr Banks, his wife Amanda, Dotcom and his wife, Mona Dotcom, were present.

Justice Wylie, in his finding, found Mrs Banks was not a credible witness and sided with Mr Dotcom's version.

But Mrs Banks tracked down two American businessmen after the trial who were also at the lunch.

The businessmen said there was no discussion of donations. The Court of Appeal found their affidavits could have changed the trial and, because crucial information about the evidence had been withheld, it cancelled a planned retrial.

Today, Mr Banks' lawyer, David Jones QC, said if it was not for Mrs Banks, today's hearing would not be happening.

The case had been turned on its head, and Mr Banks had suffered a grave injustice and was now asking for justice, he said.

Mr Dotcom fabricated evidence and was able to influence others including his wife and his security guard, Mr Jones said.

The Crown knew there were inconsistencies in the evidence but did not track down the American businessmen, he said, and the case was not an issue of misconduct but injustice.

But the Crown said the case had to go to trial.

Its lawyer, John Billington QC, said there was a high level of public interest and the Crown had enough evidence to go to trial.

Regarding the Dotcom evidence, Mr Billington said there was no evidence available at trial to suggest Mr Dotcom was fabricating evidence - instead, there was evidence supporting Mr Dotcom's version.

He said both sides knew the American businessmen were at the lunch, but both sides did not appreciate the importance of that evidence.

Mr Dotcom changed his evidence when he learned of what the businessmen had said. It was only when that happened that the Crown case became untenable, Mr Billington said.

Justice Wylie has reserved his decision.

But, before he adjourned, he had a message for Mr Banks. He told the former politician that he had made an error in his judgement when he found Mrs Banks was not a credible witness. He asked Mr Banks to pass that message on.