Uber says it's not trying to replace the taxi industry, despite calls from taxi drivers for the government to crack down on it for unfair practices.

More and more New Zealanders are turning to the app-based ride service for their daily use, and say it's both cheaper and easier than traditional taxis.

The service launched in 2009 in California, offering passengers a way to order a ride and pay for it with a touch of their phones.

By 2014, Uber had expanded internationally, and it is now worth over $60 billion. 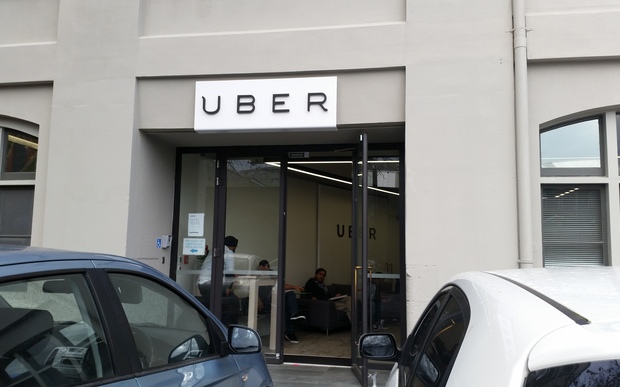 The Uber model works well because it doesn't actually own any vehicles, and almost anyone can sign up their private cars and become a registered driver - and therein lies the problem.

In April, the company changed its rules to allow drivers who didn't have passenger licences.

Since then, 1700 Uber drivers have signed up across New Zealand, and taxi drivers aren't happy.

About 100 taxi drivers picketed in Christchurch yesterday, saying their incomes had plummeted 30 to 50 percent since Uber started in the city.

There were real differences between taxi drivers and Uber drivers, he said.

"With taxi drivers many of them drive full-time, sort of 50 to 60 hours a week, whereas the typical ride-sharing driver usually drives less than 10 hours a week.

"It's very much people who are using this as a form of supplementary income." 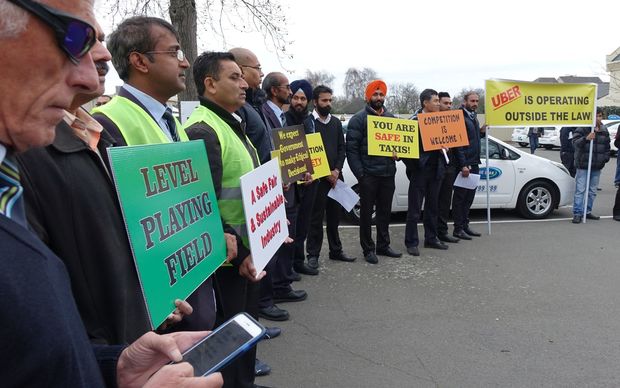 Taxi drivers protest what they say is a lack of action on Uber in Christchurch Photo: RNZ / Conan Young

Taxi drivers aren't the only ones who are unhappy. The New Zealand Transport Agency (NZTA) has already ordered seven Uber drivers off the road for not being licensed.

It has also issued 34 formal warnings and 11 infringement notices.

Transport Minister Simon Bridges said the government had tried to create flexible laws to accommodate new transport technology, and it was sad to see the rules weren't always being followed.

"What is also clear is that in terms of some Uber drivers, that is not happening, they are driving without the passenger endorsement, and this to some extent is part of their business model.

"What is clear is, in New Zealand, we follow the rules, and we expect the rules to be enforced."

But Uber is still pushing back.

Mr Menzies said all its drivers underwent criminal and driving history checks approved by the government, and that should be enough.

"We believe in the two months we've been operating these new processes, we've shown the government and NZTA that this really is a viable alternative.

"We can provide safe, reliable and affordable rides, in a much more fast and efficient way that doesn't require months to get all the required licences and doesn't require thousands of dollars."

He hoped Uber could work with the government to make it easier for more amateur drivers to get registered, and make a little extra money on the side.

What about the customers?

Many New Zealanders are beginning to see Uber as an alternative to taxis.

Amanda Kennedy is a 35-year-old copywriter living in Auckland. She had avoided using taxis in the past because she didn't know who would be at the wheel, she said.

"When I was in Queenstown last week I caught a taxi on the street, and the dude tried to come into my house.

"I've had that with taxi drivers before, putting their hand on your leg and stuff like that."

She tried calling the company to complain but, because she left the taxi in a hurry and didn't check the driver's name or ID number, it couldn't help her.

The passenger had more control with Uber because the driver's profile was shown when the ride was ordered via the app, and passengers could rate the driver's performance afterwards, Ms Kennedy said.

"The feedback system has been changed to give you the option of saying why you didn't like them, and they get in touch.

"I had a driver who was accelerating and braking the whole time, and it made me feel really sick, and I said that back to them, and they got in touch and credited my account."

Visual arts student Vanessa Crofskey, 19, said Uber was a cheaper option for getting around than having to buy and maintain a car.

Some weeks she only used the bus, but others she used Uber nearly every day.

"As a student, it's a lot more expensive to catch a taxi, and [Uber's] a lot more practical.

Catching a bus often wasn't an option when staying late at university or out clubbing with friends, she said.

"If you're out late at night, it's probably the safest measure you can take instead of having to catch a bus.

But she was concerned about Uber's new practice of hiring drivers without passenger licences, because it could mean that anyone could arrive in a car to pick her up.

NZ Musician editor Silke Hartung said she used Uber a few times every week, and there was always a risk when getting into a car with a stranger.

"In both taxis and with Uber, you will have the occasional strange person who makes you feel uncomfortable in a car, but overwhelmingly my experience has been positive."

Most Uber drivers she had come across doubled as taxi drivers as well, and hence already carried the proper licences.

While ride-sharing was "the future", it didn't spell the end of the taxi industry, she said.

"They'll be forced to catch up with technology a lot, but they'll always be needed.

"Different generations will be much more comfortable calling a taxi because they'll feel it's more reliable than an app."

Taxi companies would have to figure out how to modernise and stay relevant, she said.