A sculpture on the Porirua Writers' Walk honouring esteemed author Patricia Grace has been unveiled.

Standing about 3m high, the iron sculpture is inscribed with a quote from Mrs Grace's 1986 novel, Potiki:

"Morning came slowly giving outline to the sea and hills, patterning the squares of houses, moulding the rocks, the power poles and the low scrub." 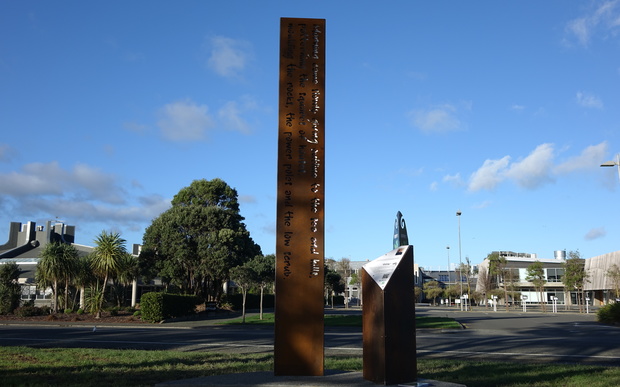 About 30 people were present for the event at Titahi Bay in Porirua. Photo: RNZ / Emile Donovan

It is appropriate, then, that a bright and brisk Saturday morning was the setting for its unveiling on the shore of Titahi Bay in Porirua, as the legacy of one of New Zealand's finest and most acclaimed authors was commemorated. 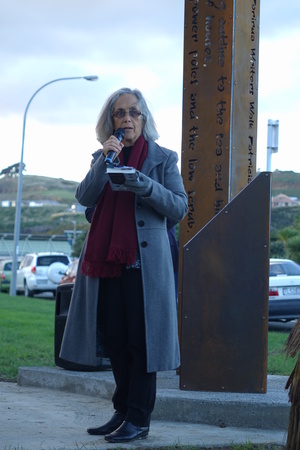 About 30 people were present, including Mrs Grace's son, Wiremu, who read the above quote to pensive smiles and murmurs of appreciation from the audience.

She said the rise of women and Māori in both the writing and publishing industries had been a significant - and welcome - change over the course of her career.

"When I first started writing, women's writing was just coming to the fore", she said.

"Also, the upsurge of Māori writing to go with the Māori renaissance. That's been something very pleasing: that Māori life - ordinary, everyday life - is being shown in part of our country's literature."

Mrs Grace said that, while she didn't see herself as either a "Māori" writer, nor a "female" writer, people were free to label her as they saw fit.

"I'm a writer who wants to write about the ordinary everyday life - of Māori people, or New Zealand people, or just people."

The sculpture is the second artistic instalment on the Porirua Writers' Walk, following a pou which commemorates wordsmith Te Rangihaeata.

Over the next five years, various other commemorative artworks will be erected, honouring Porirua's rich literary history.

Mrs Grace said the city was an important place to her life and her work.

"Porirua's been a source of inspiration for me, because I live here: I think the place where you live is bound to be an inspiration."

"You can branch out from there and look outside of there, but probably always come back to the place you know, and the people you know."