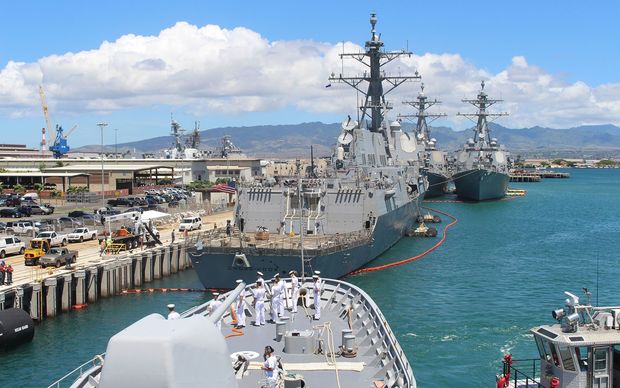 The HMNZS Te Kaha berths at Pearl Harbor, alongside the USCG Stratton, the USS Chung Hoon and the USS Mobile Bay. Photo: Supplied

The Rim of the Pacific (Rimpac) exercise gets under way later today.

Twenty-six countries will take part in the biennial event, including China, for just the second time.

New Zealand was at the first Rimpac in 1971 and attended regularly until the nuclear ship dispute with the United States in the 1980s.

The Defence Force returned as an observer in 2010 and full participant in 2012.

But it wasn't until the last exercise - two years ago - that New Zealand Navy ships were actually allowed to dock in Pearl Harbor, rather than nearby.

Te Kaha left Auckland in early May to travel to Hawaii, meeting Australian and French ships along the way.

"One of the things the crew is really looking forward to is the sports tournament.

"Most of my six company are under 24 years old, so it's just an amazing experience all round for them to participate in such a magnificent exercise, and also to be here in Hawaii and really experience the culture in this part of the world."

It was also an interesting time for the commander.

"This is a first for me [at Rimpac]. As I look out my cabin window I can see the USS Missouri and the memorial over there, so it's a fantastic place, steeped in history."

The crew will spend ten days in Pearl Harbor before heading out to sea for three weeks.

While away they will take part in gunnery practice, missile firing, boarding operations and anti-submarine warfare.

Mr Lenik said the Defence Force will also demonstrate the capabilities of the Seasprite helicopters missile systems for the first time.

"We're really about demonstrating our capability so if required, if the Government demanded that of us, we could contribute as part of an alliance or a coalition."

Te Kaha will return to New Zealand in mid-August.

Forty-five ships, five submarines, more than 200 aircraft and 25,000 personnel will participate in Rimpac.