ANALYSIS: Whether Britain should remain in the European Union has been one of the most divisive political issues for that country in a generation.

Millions of people in the UK have voted in today's historic referendum on whether the country should remain an EU member or leave the 28-nation bloc.

Live results: Follow the results live and join us from 10.30am to get your questions on Brexit answered - hosted by @meganjwhelan and with business analyst Rod Oram. Click here. 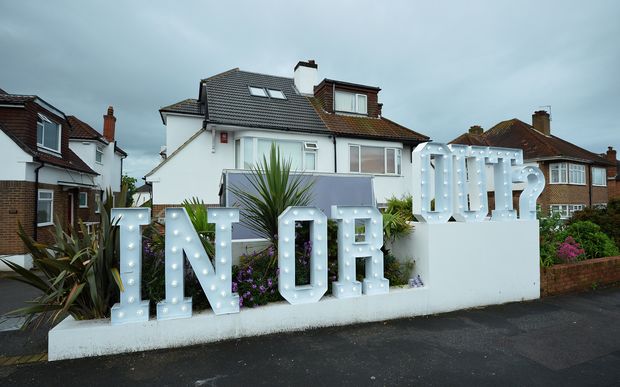 Britons go to the polls to decide whether the UK should stay in or leave the European Union. Photo: AFP

There have been dire predictions of volatile financial markets, recession in Britain, a slowing in world growth if Britain decides to leave.

But what would a vote for Brexit mean for New Zealand?

The Institute of Economic Research (NZIER) said New Zealand would suffer economically if Britain votes to leave the EU.

Some possible consequences for New Zealand should the the UK vote to leave the EU are:

Fewer tourists: Britain is the fourth biggest source of tourists in New Zealand, 213,000 in the year to May. If the UK economy contracts and there is a fall in the value of the British pound that would likely reduce tourist numbers to New Zealand.

Fall in exports: NZIER estimated that the fall in Britain's national income might result in lower New Zealand exports there, perhaps as much as $190 million. Two way trade between Britain and New Zealand was worth about $4.6 billion over the past year. New Zealand would be unlikely to face trade barriers or tariffs, but it would need to negotiate access in the medium to longer term for exports such as meat and dairy produce.

British investment: Britain is one of the bigger foreign investors in New Zealand, buying property and investing in businesses. A British exit vote might prompt businesses there to reduce their overseas investment, but longer term they may widen their investing horizons.

Immigration: Immigration has been an undercurrent to the whole referendum debate, with the Brexit camp calling for tighter immigration rules to be imposed. Whether that would mean a tougher approach to New Zealanders (and other old Commonwealth countries) is debatable. But Prime Minister John Key, who met British PM David Cameron recently, said he did not think it would mean Britain opening its doors to New Zealanders.

Doing business in Britain: Most large New Zealand exporters have operations in Britain, and some have direct ownership of British companies. For most it would be business as usual, but the regulations under which they operate might change in time if Britain leaves and replaces the current EU rules that are in force. One small New Zealand insurance company has said a leave vote would make it shift the headquarters of its current British business to Ireland to avoid any jurisdiction problems.

Financial market volatility: Buckle down for a rocky ride going into the weekend. If it is a Remain vote then a small lift in the New Zealand dollar can be expected. If it is a vote for leave then head for the sidelines. Bank of New Zealand analysts say the New Zealand dollar could fall as much as four or five cents against the US dollar as investors seek safety. The British pound will fall sharply on a leave vote as will the euro, which could see a gain for New Zealanders buying those currencies, but betting on currency markets is fraught with peril and not for the faint of heart.