New Zealand's largest electricity supplier is being accused of manipulating the price of power. 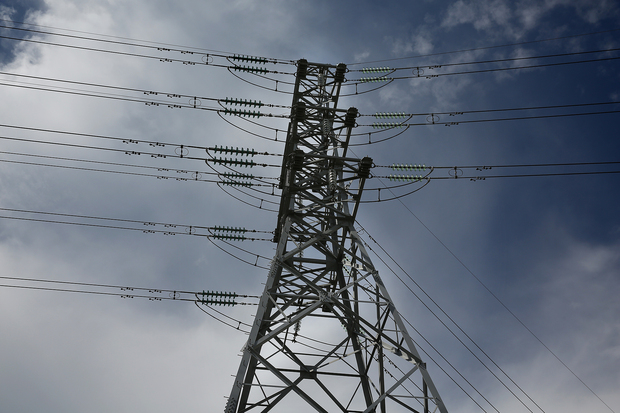 Meridian Energy has been referred to the Electricity Authority. Photo: RNZ / Diego Opatowski

The allegation against Meridian Energy has gone to the Electricity Authority whose board will take a first look at it it tomorrow.

However Meridian is adamant it has done nothing wrong.

Wholesale electricity prices generally hover at around $60 to $70 a megawatt hour.

During that time, they peaked at $5000 for a single trading period.

Phillip Anderson, director of small power retailer Electric Kiwi, said this problem started in the North Island because of very cold weather and then it spread to the South.

"We think that Meridian opportunistically took the opportunity to spike prices in the South Island, despite there being plenty of [electricity] supply - the hydro lakes are full and there were plenty of power plants on line," he said.

"We think they used their market power to withdraw cheap electricity supplies from the market and cause the South Island to spike, which hurt consumers there."

Mr Anderson has taken his complaint to the Electricity Authority - and launched a formal allegation of what is called an Undesirable Trading Situation.

This legal phrase actually represents a serious problem and if proven, can lead to large financial penalties being imposed on a wrong- doer.

"Meridian manipulated the market in the South Island to suit their own position," he said.

"They withdrew about 300 megawatts of cheap supply and instead of offering it at $50 [a megawatt hour] they offered it at $5000.

"That had the effect of stopping the market from clearing at $50 dollars and and making clear at closer to $5000."

In a statement, Meridian insisted it had done nothing wrong. It said it was wrong to say the company had removed low-priced offers and replaced them with high-priced offers.

It added it worked within the market rules and behaved appropriately, and said it would help an inquiry if the Electricity Authority started one. Any decision on whether to do so is likely to be made tomorrow.

But Flick Electric customers were forced to scramble to make sure they were not stung, because they are exposed to the spot market.

Flick chief executive Steve O'Connor said many people were careful to make sure they did not run the washing machine or clothes dryer during the danger period.

"We have got an app that our customers download and that app tells them when prices are high," he said.

"So it gives them a bit of notification and they can choose to have a look at the price on the app and decide if they want to do something."

Mr Anderson meanwhile said this matter had to be taken seriously, in case it happened again.

He said 23 nights last year that were colder than the night that caused the trouble in June, which meant similar problems could easily recur this year.