Act Party leader David Seymour has called for refugees to be required to sign a "values statement" before being allowed into the country.

"If you're not prepared to sign up, for instance that you believe men and women should be treated equally, you shouldn't come to New Zealand," he said. 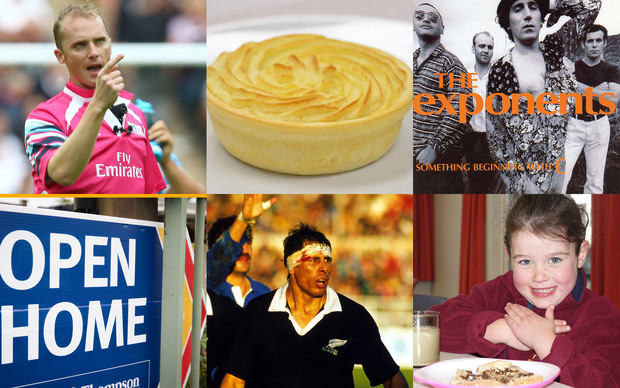 What are New Zealand values? According to the wits on Twitter, they include (clockwise from left) hating on Wayne Barnes, warning people about hot pies, Jordan Luck at the local pub, struggling without marmite, Buck Shelford's, ahem, injuries, and blaming foreigners for the housing crisis. Photo: RNZ / supplied / Photosport

On Morning Report this morning, Immigration Minister Michael Woodhouse said cultural practices were taken into account in the process of a thorough background check.

"Matters such as polygamy obviously rule them out from a cultural perspective, but after that immigration and security services do their own vetting, in association with their partners, so that as far as we can be, we are satisfied those who are coming are the most in need and are who they say they are," he said.

But who exactly can define "New Zealand values"? The wits on Twitter have given it a good go.

The hashtag #New Zealand Values has now been trending for more than 12 hours.

Some of the Tweets have a political tone.

Others don't limit themselves to New Zealand politics.

being proud to not be as racist as australia #NewZealandValues

Some focus on New Zealand's own race relations.

I'm not racist I have Māori friends #newzealandvalues

sumthin about diversity and the treaty of waitangi and pretty sure the haka is involved too all blacks and the Treaty..

Polynesians are "kiwis" when they do good things.

And "Polynesians" when they do bad. #NewZealandValues

Not caring/too lazy to pronounce our "Polynesian" names correctly. #NewZealandValues

Many of them are very topical.

When @helenkellyUnion is denied her medicine of choice by the government, lack of #NewZealandValues?

When the govt say they aim to make housing affordable for everyone but U can't get a decent house without a milli. #NewZealandValues

Moving to the Gold Coast. #NewZealandValues

And some are less so. But who can forget Marmaggedon?

Some bring up Aotearoa's own cultural quirks.

answering "yeah nah" to everything. #newzealandvalues

Having strict guidelines regarding when togs become undies #NewZealandValues

Rolling up your school uniform skirt in fourth form #NewZealandValues

For a country that can amass thousands of tweets about its values, we're, well, a little insecure.

This hashtag is genuinely depressing. We are the worst. #newzealandvalues

Some tweets show clear evidence of a lot of screen time.

Coronation Street on Friday for two hours, and an hour on Saturdays. #newzealandvalues

Informing the general public that it is the law that you must blow on the pie. #NewZealandValues

Having a mate that was in Lord Of The Rings #NewZealandValues

Trolling the Police on FB whilst there's a warrant out for your arrest. #NewZealandValues

using a roll-up as a mouth guard #newzealandvalues

Don't forget the importance of sport.

Ryan Crotty's playing a tad direct for my liking, he should be standing a fraction wider of the ruck #newzealandvalues

A multinational burger chain sticks beetroot and egg in, claims it's our tucker #newzealandvalues

Not knowing why love does this to me #newzealandvalues

Jordan Luck screaming into a mic at the local pub #newzealandvalues

Māori music being categorised as "World Music" at @JBHiFiNZ

And then there's poor old Hamilton

Hamilton trying to understand what the hell it did to the rest of the country. #newzealandvalues

New Zealand relationships in a nutshell.

Heading off to see the world. Spending 5years at the Shepherd's Bush Walkabout #NewZealandValues

Full cycle cultural cringe: Where you're damned if you stay, damned if you leave, damned no matter where you succeed. #newzealandvalues

And don't forget, Aotearoa has three official languages - but there's a whole other one.

Have no idea what number 8 wire looks like, but believe implicitly it is shit hot. #newzealandvalues

#newzealandvalues Noticing a z when it's half a page ahead of where you're up to and checking because it might say New Zealand.

Shag is a bird,an activity, and generic term for an acquaintance #newzealandvalues

Except when it doesn't that is.