The surviving crew members aboard a crippled yacht in the Pacific Ocean have been rescued by a container ship. 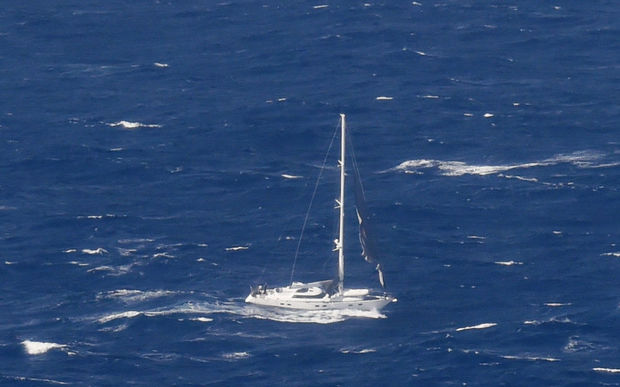 The 20m Platino was half-way between Fiji and New Zealand with five people on board when the rigging was damaged in atrocious weather on Monday morning, killing one man, Nick Saull, and knocking another man overboard.

The missing man, in his 60s, was not wearing a lifejacket.

The other three members of the crew - the boat's owners, Tory and Harry McKeogh, and Ross McKee - were rescued from the damaged vessel on Tuesday afternoon.

The Maritime New Zealand Rescue Co-ordination Centre said lines were used to help get the trio safely on board the container ship Southern Lily.

Mr Saull's body remained on board the abandoned yacht, as it could not be safely transferred in the difficult weather conditions - with 3m swells.

The centre said it would give an update at 8.30am on whether it would try to retrieve the body and continue the search for the missing crewman.

A beacon was activated on the yacht so searchers could track it in the hope of recovering the body later.

A search and rescue mission co-ordinator, John Dickson, said the crew of an Orion aircraft searched for the unnamed missing man until nightfall, when it had to return to New Zealand.

He said an earlier attempt by the Southern Lily to bring the two men and the woman on board had led to more damage to the yacht.

"The second attempt was made and, with that, they threw rescue lines from the ship to the yacht and physically pulled the people off the yacht, one by one, and on board the ship."

Mr McKeogh's father Peter said he had spoken to his son Harry after the rescue.

He said the survivors were relieved but also in shock at the tragedy and the prospect of losing the yacht.

"It was difficult to talk, we only spoke for short periods of time but I felt that he was in a state of shock and I think shock was starting to set in."

"They're on a container ship, safe and sound but as I say I think the shock is just starting to become apparent and they're starting to think about what's happened and what survival is about."

He said there was still hope the missing man would be found.

Another co-ordinator, Dave Wilson, told Morning Report this morning that conditions had also been challenging the previous night.

"There was a smaller vessel that had diverted to assist, but the weather conditions made it too unsafe for them."

Yesterday evening, Peter McKeogh said he was still worried for the remaining crew.

He said the mast had come down, and was pounding the hull quite badly as it dragged in the water.

"If that doesn't cause any damage they should be all right on board without any problems, but should it punch a hole in the boat they'll probably have to abandon ship," Mr McKeogh said.

"Everybody is pretty worried about them. Really, we can't do a lot until they get a bit of help to get the rigging cut adrift."

Mr McKeogh said those on board could motor back, if the engine was still working.

The life raft was accessible and ready to use if needed, he said.

Mr McKeogh said both his son and daughter-in-law were very experienced sailors.

He said Mrs McKeogh had at one stage been away sailing for two years, and her first son was born on board a yacht.

The yacht had registered to race from New Zealand to Fiji. A Sail Fiji organiser said Platino had pulled out of the race, and had been sailing to Fiji independently before the accident.

Platino was entered in the cruising class, and would have started its racing voyage on 1 June.