It's been ten years since sign became an official language, but the deaf community say more needs to be done at the school level. 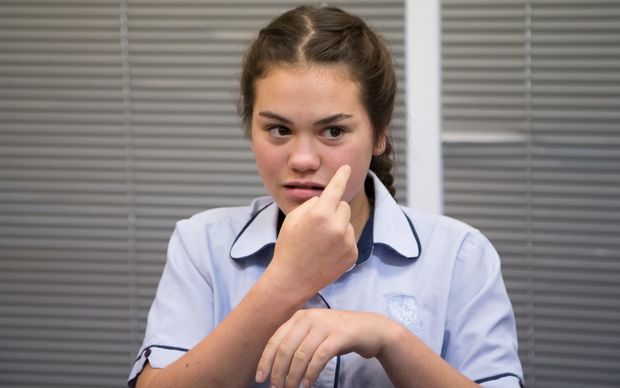 About 4000 New Zealanders are deaf and 20,000 people use sign language everyday in this country.

Student Georgia Urlich is one of 10 deaf students at Kelston Girl's College in Auckland.

It is one of nine schools involved with the Kelston Deaf Education Centre which provides interpreters, teacher aides and deaf teachers to help deaf students learn. 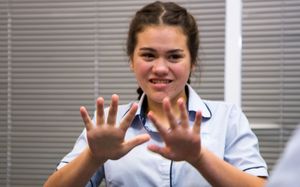 The 15-year-old has been there for two years and signed that she had already noticed a difference.

"I've been in the mainstream system for quite a while in Hamilton before I came here. I struggled, I just couldn't seem to learn anything because I didn't have the access that I have now. So when I came to Kelston Girls College, there was so much support and people were signing to me. Everyone was using New Zealand sign language, so it's really, really helped me being here now."

She believed she had the same opportunities as those who could hear and her peers were more aware of sign language.

With NCEA achievement standards in sign language starting for the first time this year, she believed things were getting equal. 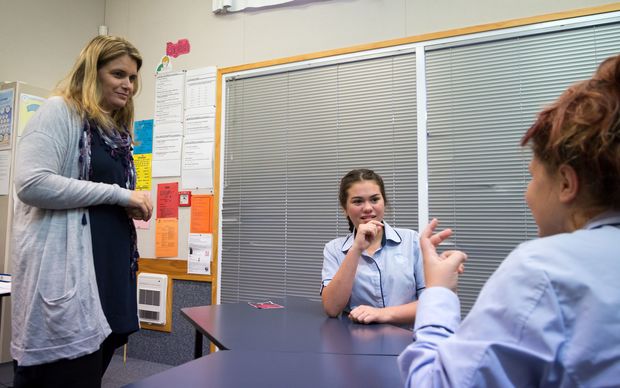 She said a lot had changed since sign became an official language in 2006.

"There's much more opportunity. It gives the students, not just the students at Kelston Girls but also out in the community, more opportunity to be successful and equally like you or I. I think it boosts their confidence because it's who they are, they're able to express themselves in sign language, access information in sign language, it really makes a difference in their confidence."

But it had not always been that way.

"Just seeing today now the students who have access to sign language, and the confidence in them and the identity of who they are, is a lot different to what it was when I was at school. I sometimes wish that I had that access to that information because I missed a lot of information, and if I had the interpreter in my classroom I think I would be more successful in my education, if you know what I mean."

Despite the growth of the language, she said there was more work to be done.

"There is funding out there for mainstream schools but we need more, there's not enough." 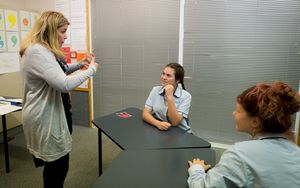 "Deaf people are now starting to feel that they've been heard after a couple of decades of lobbying for better access to education for deaf people - the last two or three years closely engaged with by the Ministry of Education - and deaf people have been at the centre of many of the discussions about issues that affect them and their children.

"We are starting to see a real pick up by the general public and the wider community. And certainly what we're seeing a lot of parents are actually talking about how they've learnt sign language from their children, when their children have learnt it at school."

But he too pointed to a gap in the number of interpreters, with less than 100 in the country.

Mr Keating said given a country like Finland, which has a similar population, had 800 interpreters, New Zealand was behind.

"New Zealand is certainly well under-resourced in terms of sign language interpreters available for the deaf community. That means that on a daily basis deaf people are going without access, through interpreters to a whole range of services. They're also not having their education needs met by having permanent interpreters in classes in many cases.

"It's a funding issue, it's a lack of awareness of the need and also having the people who want to go on to become interpreters. If we're increasing awareness then we'll have more people coming through and studying interpreting but it is a slow process."

It took a three-year bachelors degree from AUT to become an interpreter. 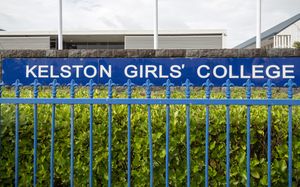 Despite people approaching Deaf Aotearoa to become one, it's an ongoing challenge to get people to move to Auckland and complete the course.

"We're only seeing a dozen or so interpreter students go through every few years so the growth in the workforce is negligible and with a high percentage of the interpreter workforce being women there are ongoing losses to the workforce with women going into parenthood. The net gain would be small and sometimes it may even be neutral in terms of interpreters going in and coming out of the profession.

Lachlan Keating said the issues in the sector flow through to the opportunities for deaf people once they themselves have completed their education and entered the workforce.

"Certainly there are many deaf people who are unemployed or under-employed who are extremely capable, have university qualifications and degrees and sometimes higher who are not working or certainly not working to the level that they should be.

"Underemployment is a big issue for deaf people. There are deaf people as I said with university or tertiary qualifications are working in lowly paid jobs and are not given opportunities to fulfil their potential which is really disappointing.

He said some employers overestimated the communication barriers and needed to provide opportunities for deaf people.

"When we're talking about labour shortage in different areas there are certainly opportunities there for deaf people to move in and some very highly qualified and skilled and capable deaf peopled need to be provided with opportunities to enter the workforce, and also not just enter the workforce but progress into leadership roles and really have an influence on their organisations."

She said there was quite a lot of work being done to develop more sign interpreters, including putting about $1 million a year into projects to encourage sign language.

"There's been more support, more courses, more people being interested and actually trying to get it to happen more organically as well."

She said the government also needed to talk to employers and make sure they were deaf and disability confident.

"One of the things that I'm particularly interested in is making employers more disability confident because if you can match the right person to the right job, sometimes it can be an advantage.

"There's a whole lot of myths about employing disabled people that we need to break down."