The man accused of murdering his ex-girlfriend and her three year-old daughter before burying their bodies under a motorway bridge has been found guilty. 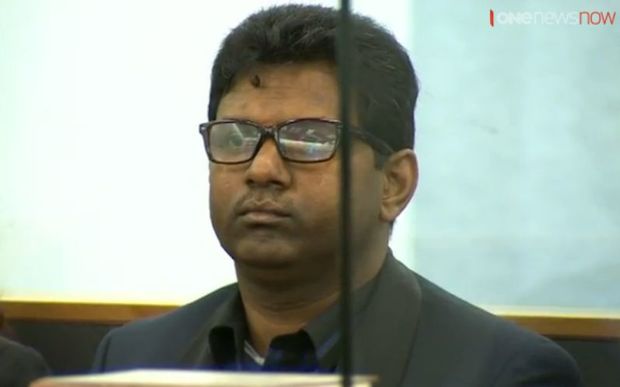 Kamal Reddy at the High Court in Auckland Photo: TVNZ / One News / Screengrab

At the High Court in Auckland this afternoon a jury found him guilty of killing Pakeeza Yusuf and her daughter, Juwairiyah Kalim, in 2006, and burying their bodies under a motorway bridge on Auckland's North Shore.

Kamal Reddy denied murdering the pair and faced a two and-a-half week trial at the High Court in Auckland.

The jurors returned their verdicts after four-and-a-half hours of deliberations over two days.

Speaking outside the High Court in Auckland, Detective Sergeant Stephen Nightingale read a statement from Ms Yusuf's family saying it had been a long journey.

"Pakeeza was the eldest daughter in a family of five children. She was beautiful and caring and a wonderful mother to Juwairiyah.

"We are extremely pleased that this offender will now be held accountable for his terrible actions. We would never wish for anyone to go through what we have and are thankful that our questions have finally been answered and we can now move forward with our lives."

Earlier inside court, Reddy showed no emotion as the verdicts were handed down.

In contrast, members of Ms Yusuf's family wept and consoled each other in the public gallery.

Two years ago Reddy thought he was in the clear.

He murdered Ms Yusuf and Jojo in the early hours of a December morning back in 2006 while the pair slept in their Howick flat.

Reddy's name was not on the lease.

He used an iron cord to strangle Ms Yusuf and a pillow to smother Jojo. That meant there was no blood at the scene.

He then moved the bodies to the back of his car, covered in a blanket, to the burial site under a motorway overbridge where he knew there were no cameras and no passers-by.

The bodies lay undisturbed in their muddy grave for eight years.

Juwairiyah Kalim - known as Jojo (left) - and a photo of her and her mother Pakeeza Faizal, also known as Mubarak Yusuf. Photo: Supplied / NZ Police

In the aftermath, he slowly moved Ms Yusuf's furniture out to a private storage lock-up and waited months to sell it.

He also dumped the pair's clothes in clothing bins around South Auckland.

But it all came unravelled when police launched an undercover operation.

Undercover police officers befriended Reddy then invited him to participate in a series of staged criminal activities, which he believed were real.

Reddy's case was the first time a jury has heard detailed evidence about the methods used by police but strict suppression orders prevent RNZ News from reporting them in detail.

The six month-long operation ended with Reddy telling officers in great detail just how he carried out the murders and buried the bodies.

He even led one undercover officer to the spot under the Takapuna motorway bridge where he had buried the bodies.

Reddy claimed at trial his confessions were a lie and he had been covering for Ms Yusuf's new boyfriend James.

Reddy will be sentenced in June.