A tiny mite may be an effective new weapon in the war on wasps after testing found that an attack on a nest reduced it by a third.

As part of his work investigating whether the wasp mite could be an effective new weapon, Landcare Research's Bob Brown digs up wasps nests and study how they respond to infestations from the mite.

Dr Brown painstakingly counts the thousands of individual holes in the honeycomb and compares it to a nest infested by mites, to work out how big an impact the mites are having.

This week he dug up a nest that had not been infected by the mites to show RNZ what a healthy nest looked like:

"There's a lot of traffic and they are aggressive," he said. "These guys are hitting me in the head and are generally aggressive."

The nest - which took the wasps less than six months to build - was made up of layers of wasp honeycomb and almost filled a 20-litre bucket.

But Dr Brown said it appeared the mites were winning the war.

"If you think of a healthy nest as around 12,000 cells and you compare that with the nest that's been infested with mites, there it's about 4000. So a basketball to a large grapefruit is the difference." 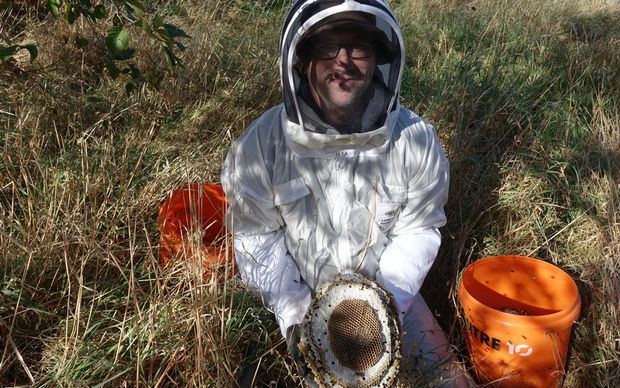 Bob Brown with a wasp nest he has dug up. Photo: RNZ / Conan Young

This year had been a particularly bad one for wasps and he was surprised there had not been more fatal wasp attacks.

"This is a football pitch here next to us and so every Thursday the guys come over here. If they kick a ball over here and they come to retrieve it then it could be a pretty bad day for those guys.

"You might get away with it if you moved fast enough but chances are probably not. Once they get in this attack mode they'll follow you up to 10 metres."

And it was not just people that were threatened by wasps. The pests striped beech trees of the honey dew that native birds relied on and also attacked honey bee hives.

They have been known to take over entire bee hives at the operation beekeeper Ricki Leahy runs near Murchison, at the top of the South Island.

"I've seen them, they'll come up to a bee and nip it in half, just like that, and grab half of it and fly back to the nest just like that." 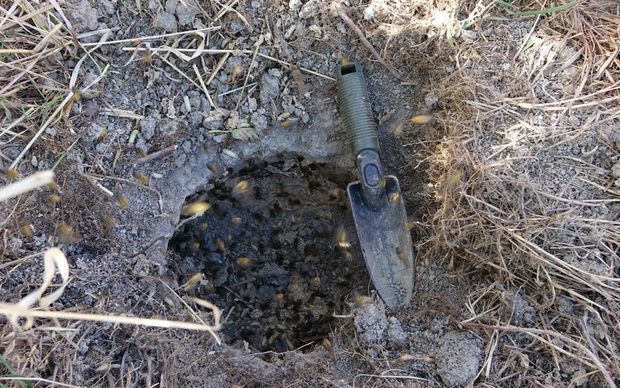 The hole left in the ground from a removed wasp nest. Photo: RNZ / Conan Young

If he did not employ somebody full time to poison the wasps, they would have driven him out of business, he said.

"I remember when I first moved to Murchison, wasps were a whole new thing to me and they were attacking so much.

"I actually had a bag of dog bones and I threw that out on the ground in front of these baby hives and of course all of the wasps got distracted on those and I was just pulling my hair out not knowing what to do.

"So I just shut all of those hives up and went back to Canterbury where there were no wasps."

Before Dr Brown's wasp mites can be bred on mass and safely released into the environment, more needed to be understood about why they were so harmful to wasps.

Dr Brown said he was discovering more about them every day and hoped they could be pressed into service in the fight against wasps in the near future.