Auckland is set to rank alongside cities such as Melbourne and Sydney after yesterday's announcement that parking charges are to rise.

From June the cost of parking in the city will go up and will mean that in some areas a day's parking will jump from $16 to $42.

Parking on meters in the Auckland's core downtown area will rise by 50 cents an hour, to $4.50 an hour for the first two hours, and then cost $1 an hour more reaching up to $9 an hour for longer stays.

CBD fringe areas currently priced at $2 an hour would rise to $3 an hour, and up to $6 an hour for people parking more than two hours.

The biggest change will hit motorists prepaying for an eight-hour park in the outer CBD zone, with the cost trebling from $16 to $42. 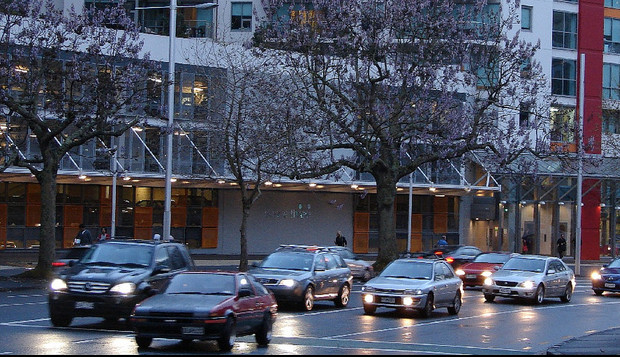 Inner-city meter spaces are occupied for 94 percent of the time at peak hour. Photo: Wikicommons

The new prices make the highest Auckland parking charges almost as expensive as parking in London's West End, where it costs £4.50 ($NZ9.56) per hour.

In Sydney's Darling Harbour during office hours, it costs $AU4.70 ($5.20) per hour to park, although there is a two-hour limit.

Parking design manager at Auckland Transport, Scott Ebbett, said the move was in line with AT's policy of pricing parking depending on demand.

"The idea is that when parking's full, you try and bring that occupancy down a bit."

Inner-city meter spaces are currently occupied for 94 percent of the time at peak hours and 84 percent in the CBD fringe.

He said the changes are also in response to complaints from businesses, who say their customers are finding it impossible to find a place to park.

"In some areas like the Wynyard Quarter and around Sale Street, at $2 an hour it's cheap to park there all day long.

"Wynyard Quarter is at 97 percent occupancy."

He said this was unheard of in other major cities around the world.

"You're not going to find any cities comparable to Auckland where you can park all day on the street."

"If you go to Sydney or Melbourne, it's the price you pay for parking."

Compare parking rates throughout the country

Heart of the City CEO Viv Beck said the new charges were a step in the right direction.

"Obviously in the end, businesses need to see that parking is available for customers and for services important to their business.

"I mean, we all know it's frustrating to keep driving around looking for a carpark, and the aim is to free up carparking through that pricing approach."

Ms Beck said it was difficult to know if the pricing changes would have a big impact, but she would be keeping an eye on the feedback from businesses.

Public transport lobby group Generation Zero said it welcomed the plan, and making it harder to park in the city would incentivise commuters to use public transport and help reduce carbon emissions.

But Auckland director Leroy Beckett said he was worried there might already be too much pressure on bus and train networks.

"What we have to think about is whether our public transport system can take all these people.

"We saw in March that sometimes it's not up to the amount of people who want to use it."

He said the right strategy was to make it harder to drive around Auckland, but at the same time make it easier to use public transport.

For those who still want to drive to work, there will be little option but to turn to car park buildings, that charge an average of $24 a day.