Hundreds of patients on dialysis for serious kidney problems face significant charges if they travel to Australia on holiday or business.

A reciprocal health agreement between the countries specifies that New Zealanders are entitled to free acute care in emergencies, but not booked 'holiday dialysis', or 'away from home dialysis'.

Until recently the charges have largely not been imposed and Kiwis on dialysis in Australia for work or a holiday had received life-saving haemodialysis for free, and it is not clear why charges are being levied now. 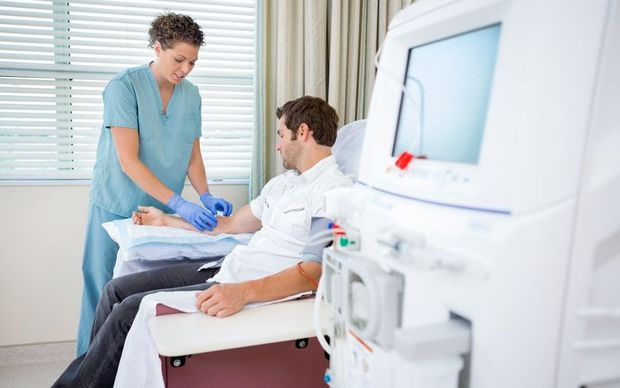 Patients and doctors say dialysis, previously provided at no charge, is now costing up to $1000 per treatment. Photo: 123RF

"What we found a little while ago was that some of our patients who'd previously gone to Australia and had dialysis provided for them at no charge were now being charged for their dialysis treatment, which could be anywhere from $NZ600 to $1000 per treatment, and obviously that's an exorbitant cost for some of these patients."

The charges appeared consistent with the reciprocal health agreement.

"I think for all the years before that it was probably just an unwritten rule that if patients were over there and they had a few treatments the [dialysis] units didn't charge and the same was done back here in New Zealand, said Dr Leikis.

"So until recently no-one in New Zealand has charged Australians for their care if they're travelling this way."

It was unclear what the case was in all Australian states, but Queensland and Western Australia now charge while New South Wales does not.

"In New South Wales, their state government has actually made a special exemption for dialysis patients to get up to 10 treatments covered by the New South Wales government as long as the state they come from, be it New Zealand, offers that in return for their patients should it be needed."

A person on haemodialysis going to Australia would probably need a treatment before they left, one just after returning home and two while they were away. If they were away two weeks, they might need between four and six treatments.

If a person went without dialysis to save money and then became unwell and needed urgent care, that would be free, Dr Leikis said.

"You could argue that people should just wait until they get sick enough and then they'll get their free treatment but it's not a situation we want to put patients in."

One woman, Rachel*, told RNZ her 74-year-old mother visited Brisbane occasionally to see her grandchildren and was surprised to be charged $1000 at a Brisbane public hospital in January 2015 for one dialysis treatment, as it had been free on an earlier visit.

They shopped around and paid $500 for a dialysis session at a private clinic instead. The mother and daughter raised the issue at Wellington's Capital and Coast District Health Board when they returned home, but were told by a nurse that there was nothing the DHB could do.

Rachel said her mother will get just one treatment only on future visits because of the cost.

"It's sad because it's limited her travelling overseas and going to visit her grandchildren."

The Kidney Health New Zealand patient advocacy group said it believed the dialysis was covered by the reciprocal health agreement.

Chief executive Max Reid said clarity was needed over what charges were being levied and where in Australia, and if there were to be charges, there should be national consistency across both sides of the Tasman.

Having to book dialysis overseas was an additional difficulty for patients, he said.

"This is not equipment that can be transported around with them, so in the absence of these away-from-home options a person on haemodialysis would otherwise be virtually locked within their own community."

Napier man Craig Leckner said it was also difficult for those on dialysis being able to travel within New Zealand.

Mr Leckner was still fuming over an attempt he made last June to book the only campervan in his region equipped for dialysis so he could have a special holiday with his wife and six-year-old daughter.

He was devastated to be told shortly before the planned holiday, in early December, that the brand of dialysis equipment he uses wouldn't fit into the campervan and therefore he couldn't use it. It was too late to book for dialysis at the hospital clinic near where he had planned to go.

"We simply couldn't go. There was no way I could leave home because without my machine I wouldn't last very long. It was really upsetting for my wife and daughter."

The Ministry of Health said holiday dialysis can fall within the reciprocal health agreement but eligibility needed to be considered on a case-by-case basis.

Acting Director of Protection Regulation and Assurance, Phil Knipe, said each health board could decide if it could provide the service and whether it would charge.

"A patient knowing that their condition would require medical assistance while on holiday needs to contact the facility in advance to discuss their dialysis needs, if this service will be available to them and inquire about costs."

*not her real name