The Education Ministry says it has searched for clues to see if it could have done anything differently in the case of an employee convicted of sexual abuse.

Robert Burrett was today jailed for 19 years and six months, over 21 sex charges relating to a dozen girls.

He pleaded guilty to the offending in February, which involved girls from two schools, including some with special needs. 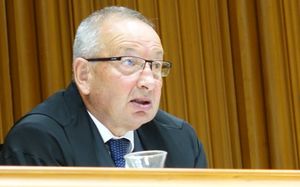 Burrett's offending took place over two years until his arrest early last year and involved girls aged between five and 12.

The offending happened on a school bus he drove and in a school shed he was able to lock from the inside.

The names of both schools have been suppressed.

Senior Ministry official Katrina Casey described the case as an "absolute tragedy" and said the ministry had searched for clues on what it could have done differently.

"Against what we knew at what time, we cannot find anything that we could have done differently."

The ministry received one complaint in May 2013 about inappropriate comments that were made about Burrett.

"That complaint came through and the transport operator interviewed Burrett and as a result of that interview we went back to the school and the parents and they were satisfied at the time and the parents asked that the investigation not continue."

Burrett was moved to another bus route.

Legislation has been tightened so that complaints against staff are more transparent and schools must report any complaints with the ministry.

"All the conditions are in place to make sure it doesn't happen again."

Victims describe aftermath of the assault

Before he was sentenced, the court heard a victim impact statement from a mother of one of the victims, whose name was also suppressed.

"I feel like a useless parent. I blame myself for not being more cautious and for not knowing it was happening.

"I hate you and what you have done and feel disgusted and sickened by what you did.

"Every day that I walk into the school and see the shed I cringe. I want to cry but hold it in for the sake of my children.

"My hope is that no child is ever allowed near you again."

None of the other victim impact statements were read out in court, but Justice Gerald Nation referred to them, including one which talked about the victim continuing to have flashbacks about the offences carried out against her.

"Another report referred to the way our daughter appeared to deliberately try to cause herself pain and say over the years of the abuse she was going to kill herself.

"One report referred to a child having become disillusioned with the world and mistrustful of the true intentions of adults."

Burrett's offending was revealed after he abused a disabled girl on the school bus he drove.

Today the judge read out a victim impact statement paying tribute to the courage of the girl who spoke out about it.

"Another parent said that although their loss was huge, their daughter's loss more, she had some small delight in knowing that one little disabled girl had told on him and that one day she would know how brave she was."

Justice Nation made reference to a probation report which said Burrett had failed to show any insight into the long term consequences of his offending.

He said it referred to the way he had dehumanised his victims and his belief that they enjoyed sex with adults and were not harmed emotionally and physically by his offending.

Justice Nation said the report stated this had allowed Burrett to justify his actions and there was a high likelihood he would re-offend if he was given the chance.

Outside court, Burrett's lawyer, Rupert Glover, insisted his client regretted what he had done.

"He's still struggling to come to grips with it.

"It's pretty significant what he did and I think he's concerned that he had this problem that he really didn't appreciate the gravity of for so long."

Mr Glover said there were no winners in the case which had impacted on the victims, their families and his client's family.

He noted Burrett's wife was in court for her husband's sentencing.

Justice Nation said while Burrett would come up for parole in 10 years, because of his lack of remorse, it was unlikely the 64-year-old would get out of jail before he turned 83.

"We can't cure these paedophiles and we know that, so the only way we can keep our kids and the public stays safe from them is to make sure they're locked away for a good period of time, and the judge has done that and I congratulate him."