A strong earthquake centred near Masterton has been widely felt in the North Island. 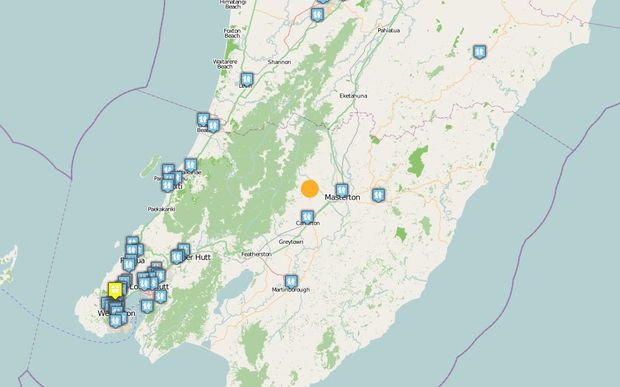 The epicentre (orange dot) was near Masterton Photo: GeoNet

GeoNet said the tremor was of 5.2 magnitude and centred 15km west of Masterton at 7.41am.

The first magnitude of M3.1 became the M5.2. Reason? A small foreshock was mixed in with the main quake. https://t.co/mzRQYroJgl

More than 2800 people have reported feeling the quake from south of Taranaki and Hawke's Bay through to the top of the South Island.

The initial magnitude of 3.1 was due to a foreshock being mixed in with the main quake and GeoNet revised it upwards.

@LOTEIGHT near Masterton! That explains! Calm down Mother Earth

GNS duty seismologist Carolyn Holden told Morning Report the depth was relatively shallow, and although the magnitude was not that great, near the epicentre it would have been felt strongly.

"There are lots of little faults around that area that could have produced that earthquake.

"It's been felt in Wellington, and very far away from the epicentre, I've been able to look at the data and I can say in Masterton the shaking would have been a relatively moderate-sized jolt."

She said the quake was too small to have caused significant surface damage or structural damage.

Two train services between Wellington and Masterton have been replaced by buses due to the earthquake and Tranz Metro warned of delays.

A KiwiRail spokesperson said trains would resume after receiving clearance from its engineers though the rail network operator was not at this stage aware at this stage of any earthquake damage to tracks, tunnels or bridges.

Police had this morning received no immediate reports of damage in the lower North Island.

Texts to RNZ said people in Whanganui, Upper Hutt and Paekakariki felt the quake with one calling it a "good shake."

Vicky texted to say the centre was 1km from her house and the shake was "one of the strongest I've felt despite living on one of the Wairarapa fault lines."

Those a little further away said it was a "good one" but Janice in Otaki said her "cup of tea wobbled but did not spill."

John, in Christchurch, was unimpressed, asking if it had "knocked the froth off" any lattes.

Several aftershocks ranging from 2.7 to 3.4 followed the main tremor.