The Accident Compensation Corporation (ACC) is refusing to confirm or deny whether it will be investing in the Ruataniwha dam in the Hawke's Bay.

ACC has declined an Official Information Act request from RNZ News that sought information it held regarding its possible investment in the Hawke's Bay dam.

It is understood ACC may invest in the dam, after cornerstone investors Trustpower and Ngai Tahu pulled out, saying the risks were too high and the rewards too low. 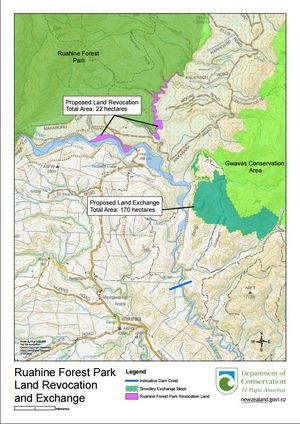 A DOC image showing the land to be exchanged to make way for the Ruataniwha Dam. Photo: Department of Conservation

However, ACC said its position would be prejudiced if it disclosed whether the information asked for even existed, and said therefore "ACC neither confirms nor denies the existence or non-existence of the information".

ACC minister Nikki Kaye cannot comment as she is not privy to ACC's investment decisions.

However, the Green Party has called on ACC to be upfront with New Zealanders.

Green Party's water spokesperson Catherine Delahunty said it was obvious ACC was looking to invest in the dam given its refusal, and said the public deserved better.

"So why does the ACC not want to answer the question, why don't they just admit they're considering doing this?" Ms Delahunty asked.

"I think that possibly they don't want to admit it because this scheme is a scheme in trouble - I heard only today that they're still having trouble getting farmers to invest in it."

Ms Delahunty said the last thing ACC should be doing with public money is investing in the dam.