A group of residents from Great Barrier Island who live entirely off the grid, say solar energy can provide enough power to run a household all year round as long as you have enough photovoltaic panels on your roof. 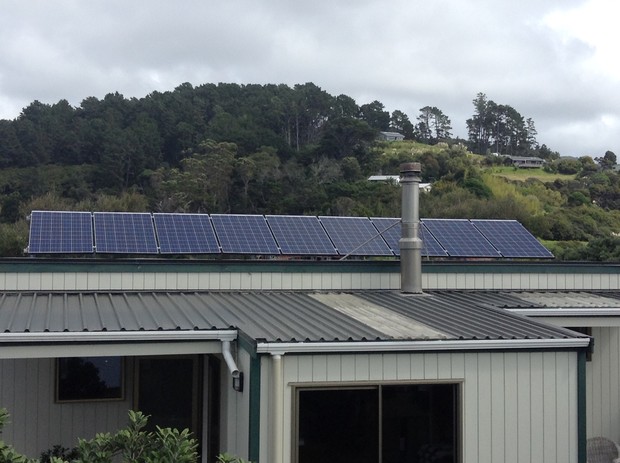 Two weeks ago the Parliamentary Commissioner for the Environment, Dr Jan Wright, endorsed a report which said the uptake of solar energy by households would increase carbon emissions from the electricity sector.

The report said this was because solar power was disproportionately generated during the summer months, while New Zealand's electricity needs were greatest in winter. If more households used solar panels, this would replace renewable alternatives that would be more available in the winter months, resulting in a greater reliance on fossil-fuel based electricity generation.

Great Barrier island, in the outer Hauraki Gulf, has a population of 950, and has never been connected to the grid. Of its residents, 92 percent use solar energy and most have back-up generators.

Orla Cumisky is the organiser of the island's Off the Grid event being held next month; she runs her family home on the island almost entirely from solar.

The power comes from nine panels generating 2.25 kilowatts of power.

She said the family had only run the back-up generator three times in the last 15 months.

Ms Cumisky's said her five-member household had all the usual appliances - an electric fridge-freezer, a chest freezer - none of which were especially low-energy use makes, but the key was moderating energy use.

"I would never vacuum my house at 9 o' clock at night because you would be taking a charge directly from the panels. If you vacuum at 9 o' clock in the morning on a sunny day you won't have any difficulty at all."

And it was not necessary to live in a very sunny spot to make solar work, she said.

"The whole idea of solar is changing so much. It's not necessarily the heat of sunshine, its light - there are solar panels now where you can get a charge from the moon."

She said Great Barrier Island residents were the only group of people in New Zealand who were all individually living without a mainstream power supply.

On the island, she said, 92 percent of residents used solar to run their appliances and lighting and a number were also using wind and tidal power.

Even the school ran mostly on solar, she said.

"We have more panels than children actually."

She said there were 48 solar panels on the school roof.

"We installed that system two years ago and we have just watched our diesel generator bill, our bill for diesel, literally plummet."

Her own home's solar system, batteries and inverter included, would be paid back in ten years, she said.

The typical lifespan of a solar panel is between 25 and 30 years, conventional lead batteries last for eight years she said.

"Probably the greatest movement in the industry in the last 20 years is in the area of energy storage."

She said the Aquion salt water battery - which is 100 percent recyclable - was now available in New Zealand.

"It is very different to a lead acid battery which runs on a kind of wave, you can discharge it to zero every single day of its lifespan and it doesn't impact it."

Ms Cumisky rejected the idea that people going off grid were making the national grid unviable.

She said she could see more electric vehicles on the road in future and the grid powering them.