A kahu huruhuru, or Maori feathered cloak, was presented to the Defence Force in a ceremony yesterday evening. 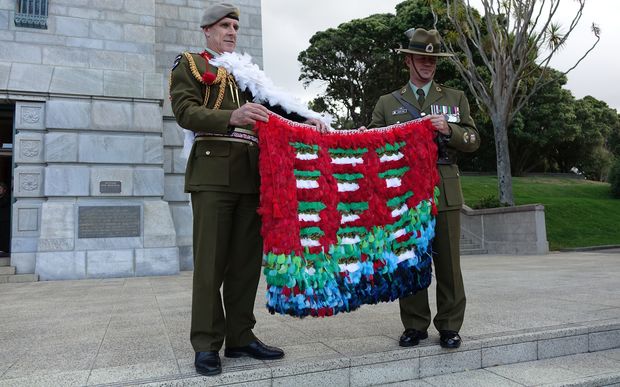 Although many such cloaks are worn by chiefs and other prestigious people, this one will be for people of all ranks to wear on special occasions.

The cloak is called Nga Tapuwae - meaning footsteps - and represents the link between those who served our country in the past and those serving today.

It was presented following a blessing and a Last Post ceremony at the National War Memorial in Wellington.

The cloak features red feathers woven amongst white to symbolise the fallen soldiers on Turkish battlefields, blue feathers to represent the oceans crossed by soldiers, and peacock green feathers which are the grass surrounding orderly graves in Gallipoli.

Warrant Officer First Class Robert Jobe wove the cloak, and travelled to Gallipoli as part of his preparations.

"It just added all that spiritual side to it, it reconfirmed what I had seen in my mind." 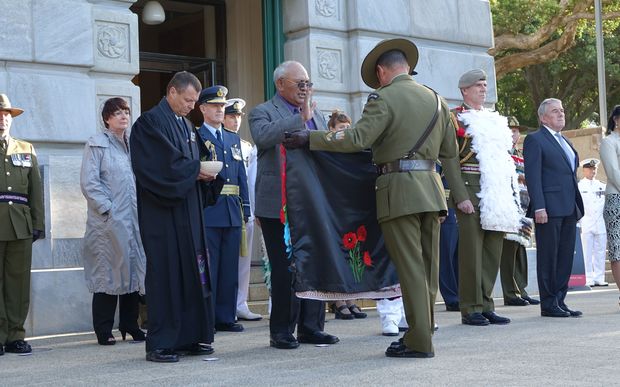 The cloak is presented for a blessing. Photo: RNZ / Kate Pereyra Garcia

Mr Jobe spent more than a year weaving the cloak in his spare time, including on the plane en route to Turkey.

It's not the first cloak he has made - his earlier work includes the korowai worn by the Chief of Defence Force.

"When I left home today... I felt sad, it's like a piece of me leaving home, but very honoured and it makes me very proud to see them worn and who they're worn by."

The importance of a cloak grew with the mana of those who wore it, he said.

Chief of Defence Force Lieutenant General Tim Keating said wearing his own korowai along with his uniform felt natural.

"They can be a chiefly status, like the one that I wear... but for this one to be worn by any member of the Defence Force, civilian and women too, it shows a maturing of our approach to our biculturalism, who we are as an organisation."

The first wearer of Nga Tapuwae will be 2015 Reservist of the Year Lance Corporal Nicholas Hill when he attends the New Zealand service at Chunuk Bair.