"Newspaper apocalypse" is hyperbolic tabloidese, granted, but there's a grain of truth there. In the UK, the final Independent newspaper was printed a few days ago, and the title now exists online only, with a much smaller, and less well paid, reporting staff. Hundreds of newspapers around the world have similarly folded, and many more are staring down the barrel, all since the Great Change.

The Great Change? Is this the bit about Sonny Bill Williams' incredible new look?

No. That was shameless and misleading clickbait. Sorry.

Once upon a time, or 30ish years ago, newspapers in the western world were, generally speaking, in rude health. Publishers confidently chased growth in sales and advertising. From the Times to the Boston Globe to the Wellington Evening Post, copious classified advertising made for plump broadsheets. Rather beautifully, that same (paid) advertising was often an added reason for readers to take out (paid) subscriptions, and it all provided ample budget for the news coverage up front. With the exception of the UK, there was relatively little direct competition for readers in metropolitan markets. But there was something coming.

And that did what?

In the mid-90s, some guy called Craig started a website in San Francisco called Craigslist, which let people post their classified ads for free. Its rapid growth was an early sign that newspapers' business models were at risk. As internet access became increasingly commonplace, sites like eBay, TradeMe and others rapidly made the idea of selling a television or finding a flatmate through a column inch of newsprint look antiquated and odd.

So they lost some ads to some websites. Doesn't sound that terrible.

Wait, there's more. The burgeoning world of online media meant news arrived at far greater pace and from multifarious new sources - and, for the most part, free; to some the very idea of a paid printed bundle of day-old stories began to look antiquated and odd. Print circulations of most newspapers were soon on an apparently inexorable decline.

So the internet is catastrophic for journalism?

No. The internet has given rise to loads of exciting and brilliant new journalism, removing the barriers to publication, introducing countless new voices, and making it a doddle for even inhabitants of small and remote countries such as New Zealand to read international titles as soon as they're published. Also, there are animated pandas, as witnessed in the world-leading online illustrated question-and-answer format column, Tony & Tony.

We'll get it corrected. No one will know. Couldn't do that in print, either.

Why didn't newspapers make readers pay for their online versions?

A variety of reasons. There were philosophical arguments about making journalism accessible. Some tried and abandoned online subscription models early on. With the exception of business-focused titles such as the Financial Times or New Zealand's NBR, there was a paucity of paywall-success-stories. Publishers of general interest titles knew their readership would plummet if the journalism went behind a paywall, given the plethora of rival sources, whether newspaper sites or broadcasters or startups.

The hope was this: if online advertising were to climb commensurate with the decline in print spend, everything would be all right - after all, the sale price of a newspaper in many cases didn't even cover the printing and distribution costs; when, somewhere in the future, those disappeared, balance would be restored.

And is the online advertising spend replacing the print drop-off?

While spending on online advertising has in most parts of the western world overtaken print, newspapers are seeing a stream replace an outgoing river. The giants of the internet, led by the likes of Facebook and Google, take the lion's share. For vast numbers of newspaper companies around the world, the print versions continue to deliver the vast part of revenue, despite falling circulations. Even notwithstanding the threat of browsers equipped with ad-blockers, the CPM is challenge enough.

Cost per thousand (M being the Roman numeral, naturally) is the going rate for online traffic, based on the number of times an ad is served up to a reader. According to one Australian financial journalist, the CPM there has dropped from 50 cents to 2 cents in a decade, meaning, writes Alan Kohler, "a journalist needs 200,000 clicks per day to pay for a salary of $100,000. You might get that if you luck on a story about a kitten being rescued from a drain, or you're the one assigned to the Brussels bombing, or your yarn gets picked up by Buzzfeed and goes global, but for everyday journalism in Australia, it's simply impossible."

Wouldn't newspapers be doing better if they stopped serving us up dross about celebrities and social media skirmishes heated up in the microwave and gave us more public-interest journalism?

It's public-interested journalism. As long as there's a battle for clicks, it's inevitable that those sorts of stories will get a good deal of prominence. Just look at the most-popular posts charts.

Does it, though? While many are quick to bemoan some of the piffle that appears on the (free) online newspapers, there is plenty of quality journalism about. In just the last few weeks, the NZME-owned NZ Herald has delivered a load of excellent reporting, ranging from a series on possible links between rugby concussions and dementia to an exposé of multinational companies paying stuff-all tax. Their rivals, Fairfax's Stuff, meanwhile, have just hired some of the best investigative journalists in the country.

While both of the big NZ newspaper groups have been facing flak for cuts that have seen some excellent journalists leave the building, they are also heavily investing in their online operations, including data and video journalism. Magazines such as the Listener, North & South and Metro consistently produce excellent writing. And the public broadcaster, RNZ, continues to innovate both in broadcasting terms and online, ranging from the plucky little upstarts on the Checkpoint with John Campbell show through to the sizeable team behind the world-leading online illustrated question-and-answer format column, Tory & Tory.

Why does RNZ get all the public money? Shouldn't other online media be eligible?

They are. NZ On Air has funded video content on the Herald's WatchMe platform, and has indicated it is open to funding investigative documentary material hosted by online media. There is a strong argument meanwhile, that its coffers should be fully contestable, including to print and online publishers. 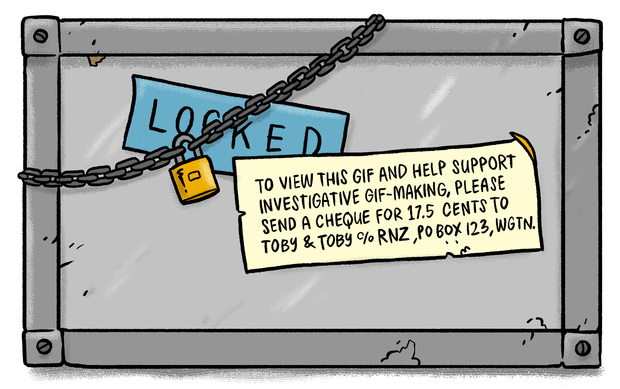 Is it inevitable newspapers will move to paywall models?

No. The Otago Daily Times has recently announced it is adopting a metered paywall, and others - such as the Herald, which has the subscriber infrastructure ready to go should it change its mind - will be watching closely. Neither of the big players looks likely, however, to follow suit in a hurry. They do not expect to depend on click-based advertising alone, however, and are instead looking to a mix of revenue sources, including sponsored content, or "native advertising".

Could you explain native advertising?

I could try, but this is already too long - look it up on the internet.

If this column was appearing in a newspaper it would have to be cut to fit and would probably become more taut and engaging, wouldn't it?

Still, at least we can all now adjust to the new normal.

Not so much. Another wave is crashing over online newspapers - which, let's face it, is itself sounding kind of antiquated and odd as a term - with the advent of direct-published social media content, led by online behemoth Facebook's "instant articles". In this new world of news, one scenario sees traditional publishers becoming simply content providers, with Facebook, Snapchat, and so on emerging as the new newspapers, with the questions of which stories to prioritise or amplify, decisions once taken by human editors, now the preserve of opaque algorithms.