New Zealand's flag vote is being seen by global media as an endorsement of the Union Jack-emblazoned current flag, rather than a rejection of the new design. 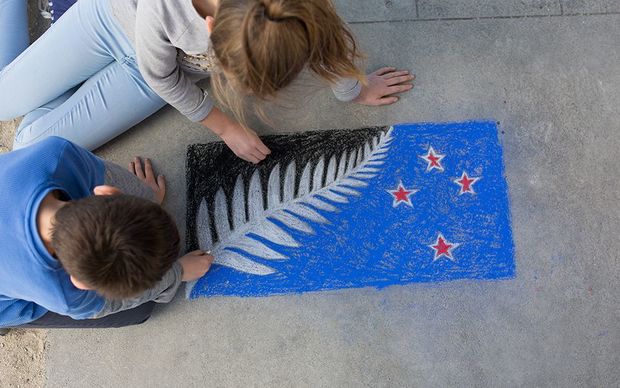 Supporters of a flag change say support for a new flag was growing, despite the result. Photo: Supplied

The black-and-blue Kyle Lockwood design was voted down by 285,000 votes in preliminary results - a much narrower margin than many polls had suggested.

International media characterised the result as a vote in favour of the Union Jack-emblazoned current flag, rather than a rejection of the Lockwood fern design.

The Financial Times said the process 'came to nothing: New Zealanders are sticking with colonial symbolism by keeping their current flag'.

However, The Atlantic noted that, 'from the reaction, the result was not so much adoration or nostalgia for the old, but a distaste for the new design'.

Many overseas reports noted Prime Minister John Key's support for change, with The Guardian describing the result as a "snub" to Key and the BBC saying it was a "personal blow" for the Prime Minister.

Reports also focused on the criticism that had been levelled at the process - it was "marred by controversy and rancor" (Xinhua) and "mired in controversy from the start" (BBC).

"Much of the criticism centred on the decision to seek designs for an alternative from the general population and none from professional designers," the Sydney Morning Herald reported.

The result prompted navel-gazing from some in Australia about their own flag.

Ausflag executive director Harold Scruby told AAP the New Zealand result was "disappointing and it's more reason for us to change."

Overseas reaction on social media was mostly bemused, with many people expressing surprise that New Zealand didn't seize the chance for change.

I'm not a kiwi & I don't care about rugby but I loved the design. Distinctive & clear. Old & new. Not sure why they kept UJ?#nzflag

Dear #nzflag and #nzreferendum. Coming from an outsider.... You've just squandered a great opportunity. Your flag is ugly as....enjoy it...

The social media reaction from New Zealanders pointed the other way, though.

BRB, just got to ring my dad to gloat [in a loving but merciless way]. #NZFlag

That referendum was way too close... 43.2% of country has wack flag stylez. #nzflag

Is there still a new flag in NZ's future?

The chair of Change The New Zealand Flag, Lewis Holden, said that meant the campaign won the debate about national identity last night.

"I'm really actually ecstatic at this result. It's not necessarily the result that we wanted, but what it showed is that there is sentiment for change.

"New Zealanders actually said 'maybe not now, but in the future, we will change our flag'."

Mr Holden said the process for the flag change should be different the next time around, with electronic voting instead of postal voting, and more input from designers.

Ryan Edwards, another supporter of a new flag who was at a Change The NZ Flag event in Auckland last night, said the result shows the majority of New Zealand is ready for change.

"I think the groundswell is there for a support of the change of the flag.

"The country is ready to show that we are beyond our colonial past, and that we're ready to stand our own in the South Pacific."

He said he was not sure if he would like the Kyle Lockwood flag to be the one ultimately chosen.

"I think it was a good design to start the debate with, whether it was the right design or the design we'll end up with in the end is something for the New Zealand public to decide."

Opposition parties are not ruling out a future debate on changing the flag, but first want a discussion on the country's constitutional arrangements.

Labour Party leader Andrew Little said the referendum "split the country and achieved nothing", but he said he would not rule out having another similar debate in the future.

"At the end of the reign of the current monarch I think will be a good time to debate our constitutional arrangements," he said.

"Do we still want our head of state living in London or do we want to do something else and stand on our own two feet? And if we want to do that - then let's have a flag that represents that."

Green Party co-leader Metiria Turei said the number of people who participated in the referendum boded well for a broader conversation.

"I personally would want to change the flag, but I voted for the old one because I could not bring myself to vote for this particular design," she said.

"People I think do want to see a constitutional discussion whether it's about a republic or just about how we govern ourselves, but John Key did not provide that for us."

Both leaders have said the flag referendum process was flawed and heavily politicised.

But Prime Minister John Key said there was nothing he would change about it and even though it was not the result he wanted, he said it was still worthwhile.