A Facebook user has lost about $200,000 thinking they were dealing with high-profile businessman Sir Ralph Norris, when in fact they were not. 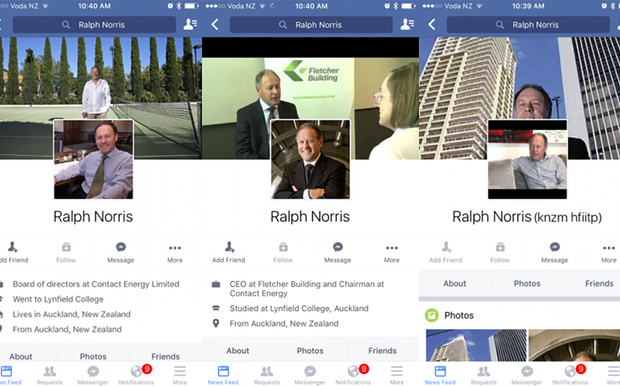 The former head of ASB and Air New Zealand has been caught up in a scam that has now sparked warnings from both the police and NetSafe.

Sir Ralph's name has been found on three Facebook profiles that authorities shut down within 24 hours, but not before people were scammed.

Detective Senior Sergeant Iain Chapman said there had been an exponential rise in the number of fake Facebook profiles being created for the sole purpose of scamming people.

"We know of at least two occasions where late last year foreigners were scammed by the people using Sir Ralph's profile.

"One person in particular lost a couple of hundred thousand dollars believing they were engaged in speaking with the Sir Ralph Norris where of course that wasn't the case at all," he said.

Sir Ralph himself has never had a social media account.

Sir Ralph, the police and NetSafe are now urging Facebook users to be very sure of who they are dealing with online.

"Before you decide to handle or send money to anyone you've met online, if you haven't met them before then consider yourself being scammed," Mr Chapman said.

"These people are organised criminals, this is their business, this is their full-time job and they do everything they can to disguise themselves between layers and layers of legitimacy.

"Almost invariably they're offshore, we see a lot of west African countries caught up, a lot of scams tend to come back to countries like Malaysia and China," he said.

Mr Chapman said it was very hard to identify the actual people behind the Facebook profiles, because they used throwaway mobile phones and using fake IP addresses in internet cafes.

"At best we may get a general location," he said.

"With more than 1.5 billion Facebook users, the platform has become a high profile target for various scams and we'd encourage people to research any offer that's being presented to them," she said.

Sir Ralph said Facebook had a responsibility to make sure people who set up profiles were actual people.

"I somehow wonder whether Facebook have got some responsibility here to make sure sites that are being put up are genuine, and they have some means of checking the authenticity of people who are presenting themselves on Facebook," he said.

"Probably the first time I was aware of the situation was about 18 months ago when it was brought to my attention that a woman in Australia had been defrauded of a significant amount of money.

"It then became apparent, when the Australian Federal Police got involved and the New Zealand Police, that it was a fake site, it had been set up offshore and funds had been channelled through Malaysia.

Sir Ralph said he was told only about 10 days ago that other Facebook profiles were again using his name.

"People should make very sure that the people they're dealing with are actually real.

"I think in my situation it was one where two women thought they were getting financial advice and had funds transferred to what they thought were bone fide investments, but as it turned out they were fake," he said.