The Ministry of Foreign Affairs says no New Zealanders were injured in a bus crash in Spain that killed 13 people. 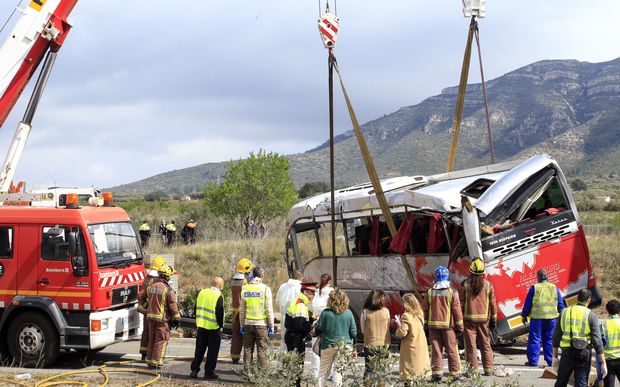 Initial reports from Spanish authorities said a New Zealander was on the bus was travelling between Valencia and Barcelona, with a group of exchange students on board.

But the New Zealand Embassy in Madrid has now confirmed that no New Zealand citizens have been reported injured.

In the latest statement released by Spanish authorities, New Zealand was no longer listed as a country affected in the crash.

There were 63 people on board - 23 are in hospital and another 26 are at a coordination centre.

The bus, which was carrying foreign exchange students from 16 different countries, crashed near the small town of Freginals, about 150 kilometres south of Barcelona.

Most of the 57 people on board the bus were students on the Erasmus programme who were returning to Barcelona after a trip to a fireworks festival.

Footage from the scene shows a white-roofed coach lying on its side, surrounded by emergency vehicles.

All of those who died were female, officials say.

Their nationalities have not been made public while the process of identification continues.

Mr Jane, Catalonia's regional interior minister, said the driver of the coach "hit the railing on the right and swerved to the left so violently that the bus veered onto the other side of the highway".

The bus then hit a vehicle coming in the opposite direction, injuring two people inside.

The location is a known accident black spot.

"There were students on board, many of them foreign students studying in Catalonia and in Barcelona who had travelled to Valencia for the Fallas and were returning," Jane added.

The driver of the bus survived the collision and has been taken to a local police station.

He has tested negative for alcohol or drugs and, according to sources close to the investigation quoted by Spain's Efe news agency, had worked for the bus company for 17 years without incident.