Thousands of people - most noticeably Irish men and women - have hit the bars early to celebrate St Patrick's Day. 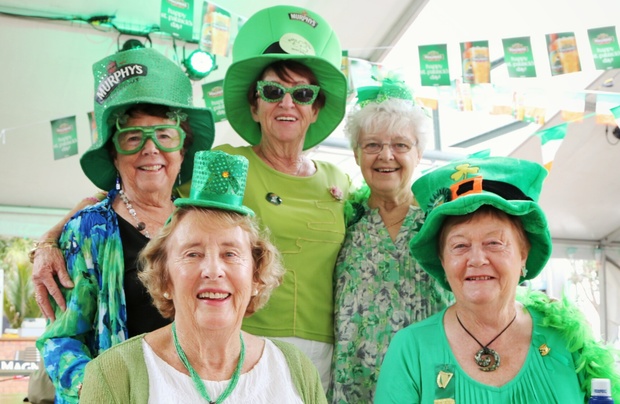 Helen Howley, back left, has been celebrating St Patrick's Day with the same group of friends for years. Photo: RNZ/ Tom Furley

Punters wearing green shirts and hats and waving Irish flags have been out in bars from early this morning to mark the death of Ireland's patron saint.

The Guinness has been flowing at O'Hagan's bar at Auckland Viaduct Harbour since it opened at 7am.

Helen Howley has been celebrating St Patrick's Day with the same group of close friends for years. Her costume for the day - a large green hat with green spectacles - has been a fixture for the past three decades.

"Our ancestors came out from Ireland and brought themselves and the faith with them, so we keep it up and it just means a great day with friends and celebrating - leave the men at home," she said.

Brian Porter moved to New Zealand from Dublin 50 years ago.

"Friends and family and celebrating of course St Patrick himself, this makes our day. This is the one day of the year where we can really be Irish," he said.

O'Hagan's manager Gavin Donoghue said the bar expected thousands of people through the door throughout the day.

"What I love about St Patrick's Day, it's a day to let your hair down and have fun.

"A lot of people tend to be Irish, but we'll take them all.

"It's enjoyment really, it's an Irish festival that is very popular back home. It's a good way of promoting Irish culture and just enjoy ourselves and get around our Kiwi friends.

"For me, coming to New Zealand recently I find that I feel a lot more Irish when I'm abroad.... It's nice to see the place going green for a day and it reminds me of home which is nice."