A five-year ban on new irrigation schemes is being called for by the tourism sector in the wake of the dairy downturn. 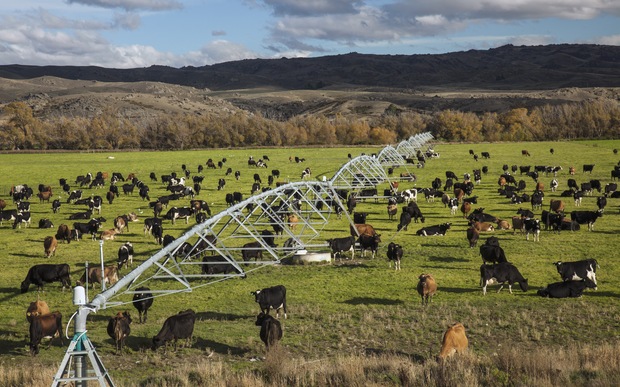 The Tourism Export Council and the Environmental Defence Society say the government's decision to pour hundreds of millions of dollars into irrigation is a gamble, particularly in the wake of the dairy downturn.

The groups also say the growth in intensive farming is a disaster for rivers and streams.

That money comes from the five-year $25m Irrigation Acceleration Fund.

That is in addition to the $400m Crown Irrigation Investments fund taken from the partial sale of state-owned assets - about $120m of which has been spent so far.

The Tourism Export Council represents more than half of the companies which bring in overseas visitors.

Chief executive Lesley Immink said she was surprised by the amount of money the government was putting into irrigation, and it appeared to have no aspiration to improve water quality.

"It's not like if it's going to happen it's when it's going to happen and with an increase in intensification, and the allocation for irrigation and the leaching, you know we need to be looking at legislation that moves us much closer to swimmable rather than wadeable."

Mrs Immink said it was a matter of when, not if, a visiting family got sick from polluted waterways, which would have international ramifications for the tourism sector.

Tourism and agriculture were treated very differently by the government and tourism was largely ignored, and that was a mistake given tourism's contribution to the economy, she said.

Tourism relied on the country's clean green image and more thought should be given to how land and water was used, Mrs Immink said.

"If the dairying industry is going to be having a bit of a downturn in the next couple of years, thankfully tourism's on the way up.

"How does it hurt having a moratorium on water allocation for five years? And at least we can sit back, review and then look at some more vision for the country and the economy and the way that the farmers are working with their farms now."

He said, given the dairy industry's current difficulties, irrigation spending seemed more like a gamble than an investment.

"It's probably a good time to have a bit of a re-think about these huge government funds which total half a billion dollars, and whether they might be better deployed outside of the dairy, agriculture sector into tourism which does seem to be the growth area for the New Zealand economy."

Mr Taylor said he would like to see that money diverted to the Department of Conservation to look after the landscape that brings in the tourists.

Prime Minister John Key told Morning Report the water storage schemes were not just about dairy, and also had good outcomes for the environment.

"It often helps the flow rate in the rivers. Some people say it leads to more intensification."

Mr Guy said dairy was going through a cyclical downturn and the irrigation schemes were long-term projects that required a lot of initial capital and also provided good environmental outcomes.

Farm company head: Tourism and dairy should work together

Andrew Watters, who is the executive director of investment and management company My Farm, said the tourism sector's recent comments were disappointing.

"In most of the scheme designs, there's the opportunity for environmental water flows through the summer where the rivers are dry normally, so we can put more water in the rivers.

"And, you know, there's the opportunity to work with the tourism sector - rowing in the Wairarapa, or whitewater kayaking or other factors."

He also said not all irrigation schemes were for the dairy industry's benefit.