Meat company Affco says Worksafe has made it a scapegoat for an accident in which a cleaner was impaled in the head by a meat hook. 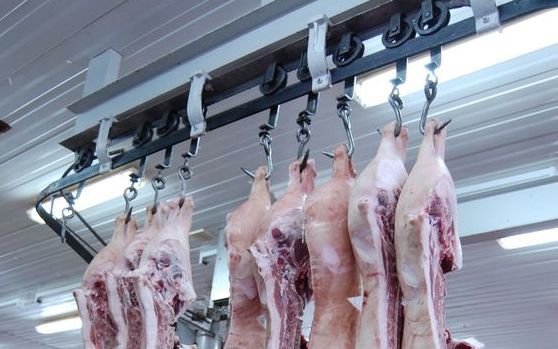 Jason Matahiki was working at the company's Rangiuru works in August, 2014 when a hook on a moving chain went through his head behind the left ear and exited close to his left eye.

WorkSafe charged Affco under the Health and Safety in Employment Act for failing to ensure its workers' safety, which carries a maximum fine of $250,000.

In the Tauranga District Court, Judge Peter Rollo ruled against the meat company and said it did not follow its own safety rules.

However, Affco said Worksafe believed someone had to be accountable for every accident.

It has a good safety record and the accident was the first on the chain processor after many years of operation, Affco said.

The accident involved a person in a restricted area despite training and signs.

After being impaled, Matahiki was carried on the hook for a short distance by the skin of his head before his cries alerted a workmate, who hit the emergency stop button for the chain, while others rushed to support his weight.

The hook was eventually dissembled from the machine by fire and ambulance crew in an ordeal that lasted about an hour and a half.

At the time, Te Puke firefighter Ivon Pilcher said Mr Matahiki was in good spirits and kept calm while the hook was being removed.

"Once we had removed it from the chain device and had him lying on the stretcher, basically he and the ambulance pulled it out," he said.

Sentencing was originally set down for this week but has been delayed a month.

Judge Rollo said Affco's own then health and safety protocols had clearly referred to the requirement for machinery to be locked out during such cleaning, or that they should not have been moving.

He found there were no checks on health and safety compliance and the cleaners "did not fully follow the company's training, as apparently taught and as specified in the workplace instructions".

Judge Rollo found proper procedures were not followed and there were "critical company failures," despite the fact Affco "intended to provide a safe and healthy workplace".

Mr Matahiki is a member of the Meat Workers' Union, which is currently locked in a collective bargaining dispute with Affco.

The union's campaign director, Darien Fenton, said it was a horrific accident which had badly emotionally damaged Mr Matahiki, who had only very recently returned to work.

"I think the saddest thing and what came out in evidence is that the worker, while he was hanging on a hook, apologised to his boss," she said.

"I think it demonstrates an attitude at Affco that anything that happens in health and safety is the worker's fault, not the company's."

Affco said it had since tightened up its access and the chain does not move during cleaning.

"The Accident at Rangi is unfortunate and the situation we believe with Worksafe [is that] they believe every accident is the fault of someone," said group manager Andy Leonard.

"We have tightened up access. In this particular incident it was a person in a restricted area and unfortunate despite training and signs.

"Affco is rated in the best 10 percent by ACC for workplace accidents in the Meat Industry and this was the first accident on the chain processor after many years of operation but still extremely unfortunate and taken seriously by the company."

In January, a German tourist working at the Rangiuru works suffered cuts, bruises and damaged teeth after being knocked out by a meat spreader on the mutton slaughter chain.