New technology - in the form of bubbles - being trialled in Nelson could revolutionise anti-fouling methods used to prevent the spread of marine pests on boats.

A mechanism placed beneath a marina pontoon blows millions of bubbles that hopefully will stop marine pests clinging to the structure. 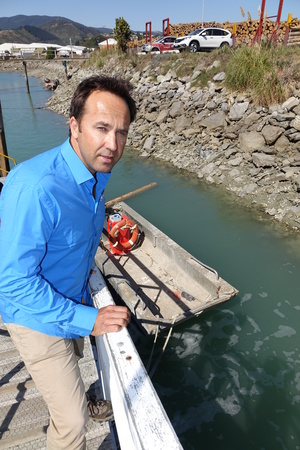 "The technology is basically a curtain of bubbles. At the (sea) surface there's a blower connected to a diffuser that throws up millions of bubbles, so rather than paint everything with toxic anti-fouling coatings, we can use things like bubbles," Mr Hopkins said.

Traditional marine anti-fouling material applied to the hulls of boats contains copper and other biocides which prevent marine organisms sticking to them.

In the 1960s and 1970s commercial vessels used bottom paints that contained tributyltin, which was very toxic and harmful to marine life. It has since been banned.

"We're only in the early stages of these trials, and we're looking at how effective the system is in preventing bio fouling - critters that grow on vessels and structures," Mr Hopkins said.

Further trials will include coating acrylic panels in a non-toxic treatment that is too smooth for marine invaders to latch on to.

"Once we have proof of concept - if we can make it work on these experimental panels, the next stage is testing on marina pontoons. Our hope is that it will result in less marine invasions on port infrastructure and less fouling on vessels," Mr Hopkins said.

He said boat owners raised a good point when they questioned the worth of treating their vessels when the marina pontoons they were moored to were fouled.

But while harbours and marinas were hubs for marine pests, boats were way they travelled around the country, he said.

"We've seen pests growing on structures, then growing on hulls immediately adjacent, but it would be great for New Zealand to find a new angle to tackle a centuries-old problem of fouling, which has been around as long as vessels have been in the sea," Mr Hopkins said.

Northland council biosecurity manager Don McKenzie said they had commissioned the Cawthron to carry out the work because of the calibre of scientists there. He said they were thrilled the trials had started, and there was a lot of interest in them from the nationwide marina operators association.

Mr McKenzie said new, environmentally appropriate tools were needed in the fight to stop the spread of marina invaders.

"We can't keep spreading these marine pests over all our best places."