High-grade manuka honey is shaping up to be New Zealand's next big gold rush, but smaller-scale beekeepers are worried about losing land for hives to those with bigger chequebooks. 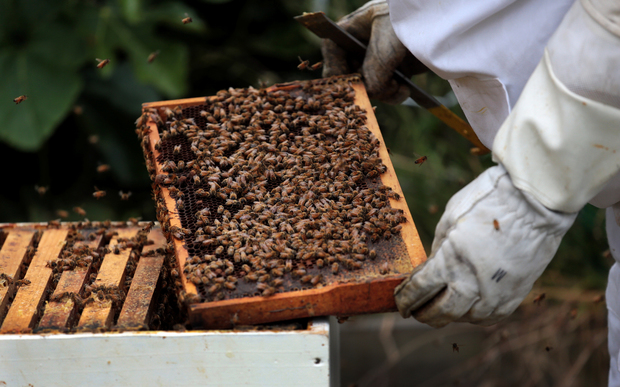 Manuka honey is worth just over $200 million a year - with aims to increase that to more than $1 billion a year by 2028. Photo: RNZ / Diego Opatowski

Top grade manuka is the mainstay of New Zealand's total honey exports, currently worth just over $200 million a year with a target of increasing to more than $1 billion a year by 2028, according to industry and government figures.

National Beekeepers Association president Ricki Leahy said livelihoods were threatened as the big players began scoping out properties they were prepared to pay good money for.

"They seem to have open chequebooks and are making all sorts of promises that they'll do 'this, that and the other'. Some of it seems ... it would be difficult for the local beekeepers to match."

Mr Leahy, who runs a couple of thousand hives on land in Murchison, said he supported growth and a fair system for all but the honey pot was finite.

Large-scale commercial interests were not always the answer to success in an area that required delicacy and sensitivity to the environment, he said.

"We've all got to be aware as beekeepers that there actually is a stocking limit. If we have too many beehives coming into any area, you're going to get less honey per hive, so therefore it's less profitable.

"We've really got to try and find a balance and I think that's what DoC (the Department of Conservation) are sensibly trying to determine," Mr Leahy said.

The department is reviewing the way it manages beekeeping opportunities, and how applications for concessions are handled.

DoC commercial partnerships director Geoff Ensor said only about 6 percent of the honey industry was based on public conservation land, but demand for space from commercial operators was unprecedented.

"The scale of demand really led us to believe there was a better way of allocating those opportunities. The reasons for that are to safeguard conservation, which increasingly there's science to tell us we need to be a little bit cautious in terms of the quantity - the density of hives in some areas."

Too many hives could also contribute to the spread of disease and displacement of other pollinators, he said - and the review process was about being fair and transparent.

"It's not about scale - it's very much about a process that delivers a good outcome for the honey industry, but also for conservation."

North Island beekeeper Kim Singleton said there were now close to 600,000 managed hives in New Zealand - the most ever, and double the number in 2005 during the peak of the varroa mite problem.

Mr Singleton said the increase followed a business and economic modelling report that put beekeeping as the next billion-dollar industry.

He warned that large-scale commercial interests threatened to remove the craftsmanship associated with good beekeeping, but said there were benefits associated with outside investment.

"There are interests overseas putting influence into New Zealand, and sometimes those interests have a better handle on the money that can be made, because they're at the market end, and know what the product is being sold for at that end."

Iwi interests had also identified manuka honey as an industry well suited to their aims and philosophies, Mr Singleton said.

The gains were now being spread wider, he said, which was good for everyone.

"The land is really a key to the kingdom, and the landowners are waking up to this and going 'hey, I want a share in some of the profit you're making', and of course for some beekeepers who've been on pieces of land for generations, that's quite a change," Mr Coulter said.

The potential for the honey was so great that manuka plantations might be the next big thing in forestry, he said.